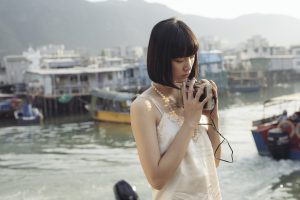 Angela Yuen as The White Girl in a scene from Jenny Suen’s “The White Girl,” playing at the 2018 San Francisco International Film Festival, April 4-17, 2018. (Courtesy of SFFILM)

Screening at the 61st San Francisco International Film Festival next week is a feature from Hong Kong. “The White Girl” is co-directed by Jenny Suen and the legendary cinematographer Christopher Dolye.

This is Suen’s first feature, albeit she had collaborated with Dolye before as producer of his directorial work “Hong Kong Trilogy” which was screened at the 2016 SFFILM Festival. The famous Australian expat Dolye has spent years living in Hong Kong. “The White Girl” is another feature in the same vein as “Trilogy,” an image-driven love letter to the bustling seaport adored as the “Pearl of the Orient.” A pearl necklace is the prominent adornment on the White Girl in the film.

The handover of the former British colony of Hong Kong back to China in 1997 began the fifty years under the ‘One country, two systems’ rule. Now well past year twenty, for this tiny piece of land situated in the southern tip of a giant communist regime, post-colonial existence is precarious. The carving out of an identity for its citizens is a constant struggle, especially for the younger generation born after the handover. The ultimate, total takeover is becoming an imminent reality.

Symbols and parallels of Hong Kong and her impending fate are ubiquitous. The White Girl (Angela Yuen) lives in “Pearl Village”, the last remaining fishing village in Hong Kong, with her fisherman father (Kin-ping Leung). We can actually see a fishing boat with the name “Hong Kong” floating at the pier. The White Girl’s father tells her to keep away from the sun so not to damage her skin. His over-protectiveness could well be his way to avoid the villagers’ gossips as they regard her daughter as a ghost that brings bad luck.

The White Girl has one friend, the boy Ho Zai (Jeff Yiu), whose name literally means ‘oyster boy’. He keeps looking for a pearl inside hard oyster shells but to no avail, later changes to selling mosquito repellents. Sound a little offbeat, but there are more incongruent characters, the quirky monk, the village school disrupter, the school teacher trying to keep order, the village Chief with his own agenda. Their appearances episodic. The main story belongs to the Girl as she meets a mysterious Japanese man at a secluded cove, Sakamoto (Joe Odagiri), a transient squatter in a historic, desolate building. The two soon form a special tie. The Girl emerges out of her shell and grateful to be seen, her identity affirmed. 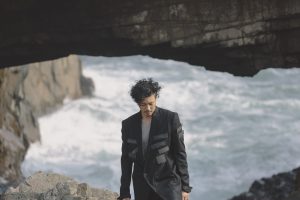 Jeff Yiu as Ho Zai, in a scene from Jenny Suen’s “The White Girl,” playing at the 2018 San Francisco International Film Festival, April 4-17, 2018. (Courtesy of SFFILM)

For those born before the pivotal handover of 1997, politics aside, a sense of loss prevails. The nostalgic phantom existence of the White Girl’s estranged mother symbolizes a disappeared past. The Girl nurses a longing for her mother, keeping her black and white photo close by and treasures a suitcase of her belonging. She puts on her mother’s clothes and listens constantly to her singing in a cassette tape. The song’s lyrics originate from a verse poem by the great poet Su Shi 蘇軾 (also known as Su Dongpo, 1037-1101), expressing the ambivalent acceptance of parting; like the phases of the moon, change is inevitable. The film is like a cinematic lament, a wistful attempt to hang on to a world the directors had known and loved.

But not everyone lingers in the past. The last fishing village is marked for a potential lucrative real estate development. The village Chief (Michael Ning) is happy to sell out to a developer from Mainland China (obviously) as investment money will pour in. The White Girl, Ho Zai and Sakamoto foil the plan momentarily. Conservation and environmental issues suddenly come into the picture in the last segment.

As much as it is well-intentioned, and despite the directors’ apparent love for Hong Kong, the film leans towards style over form. Like the White Girl’s phantom appearance, it lacks a strong structure with flesh and bones to make it come alive and to form a unified whole, rather than remaining just as a collection of fancy shots or a collage of symbolic parallels. The weak dialogues could be to accommodate the difficulties for the characters to communicate in three different languages, a major hindrance for story and character development. The issue is not with the quantity of words spoken, but their depth, or lack thereof. Overall, a well-meaning film but fails to engage. 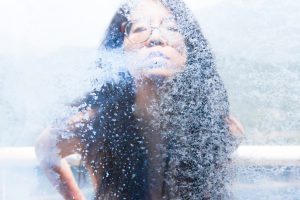 “The White Girl” will have its North American premiere at the San Francisco International Film Festival April 12 and 16. Director Jenny Suen is expected to attend. Details of show times and tickets go to https://www.sffilm.org/2018-sffilm-festival/festival-calendar/the-white-girl.