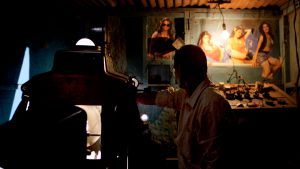 A scene from “The Cinema Travellers” (Cave Pictures India)

CALGARY (March 31, 2017) — “The Cinema Travellers” is a production from India in competition for the The Golden Gate Award Documentary Feature in the upcoming 60th San Francisco International Film Festival April 5-19, 2017.

There is the Cineplex, there is also the Akshay Touring Talkies. They drive their old truck around India, hauling a huge, rusty projector machine, heavy reels and spools, to bring the magic of the cinema to villagers in remote areas. Like a travelling circus, the cinema travellers put up their huge tents. Eager audience of all ages would buy their tickets and flood in. Sitting on stone-covered bare ground does not seem to bother them, for they are having the time of their life. Under the big top, their faces speak volumes, awestruck, euphoric, mesmerized.

Award winning photographer Amit Madheshiya’s 2010 work of India’s cinema travellers sparked off the idea for this documentary. Together with filmmaker Shirley Abraham they formed Cave Pictures in 2015. “The Cinema Travellers” is their debut feature and has since garnered international accolades, including Cannes 2016 Golden Eye Special Mention.

Made over five years, this fascinating documentary follows the Akshay travelling cinema company as it makes its stops. The film offers us a glimpse into how audiences in another part of the world embrace movie magic. No popcorn or comfy seating, high octane entertainment nonetheless as throngs of viewers young and old are enthralled by romances, mysteries, and musicals projected on the big screen.

The documentary is an homage to the celluloid and how the antiquity of the old movie projector – that hulk of a machinery that takes up almost a third of a room and which needs oil to run – still a functional piece of equipment, the remains of a potent Lumière lineage. Well, functional to the point when it breaks down during a show, and that is a frequent happening. 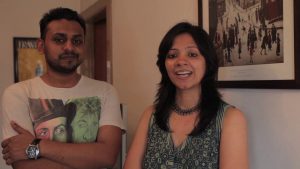 We are also introduced to Prakash, a technical genius who for decades had opened his shop to repair these antique cinema projector machines. A genuine machine whisperer, Prakash had invented a film rewinder for the big reels. This is not your VHS rewinder, but a machine that mounts up two big reels the size of bicycle wheels.

Half way into the documentary we see a turn into a new era as the Akshay staff are introduced to the digital projector. There is another set of technical difficulties to work with now and that involves the use of a computer. But they would face the problems head on. With rising expectations, audiences want shaper images and better effects. The rusty hulk of the old projector, that piece of antiquity has now become obsolete. It is sold for whatever its metal is worth and dismantled.

Does digitalization threaten our technical wizard Prakash? Not at all. We see Prakash not only can master machinery, but is also a man of insights for his time. Towards the end of the documentary, we see Prakash out in the field helping farmers use his new invention, a seeding machine that can sow four different kinds of seeds at the same time. He might try computer innovations next, he muses.

Prakash’s words resonate as we come to the end of the film: “The ability to think ahead is what makes us human.” And thus they press on.

“The Cinema Travellers” will be screened at the San Francisco International Film Festival on April 9, 10, and 15. Co-directors Shirley Abraham and Amit Madheshiya are expected to attend the first two screenings. For more info and tickets go to SFIFF website for the film http://www.sffilm.org/festival/lineup/the-cinema-travellers#.WNngvBgZNE4.