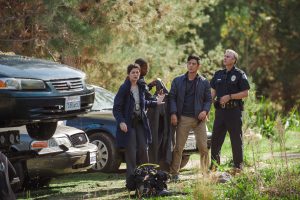 Back in July, Sandra Oh made history as the first Asian woman to receive an Emmy nomination for lead actress in a drama series, BBC America’s “Killing Eve.” Then came the sensational success of “Crazy Rich Asians”, the all-Asian cast, contemporary set studio production which still dominates the box office as I write, three weeks after it opened.

Two days after the premiere of “Crazy Rich Asians” came another quieter debut on Netflix, “To All the Boys I’ve loved Before”, an adaptation of the popular young-adult novel by Korean-American author Jenny Han. In the movie, the Covey girls from their mixed-race Korean-American family show audience that ethnicity isn’t really an issue when it comes to romance. The young love John Hughes depicted in “Sixteen Candles” speaks to teenagers of all races.

Such is the context when “Searching” opened on Friday, Aug. 31, making yet another breakthrough, that is, the normalizing of Asian actors as leads in an American movie. What “Searching” has achieved is that the race of the characters is not even an issue in the story, for it is the protagonist, a desperate father trying to find his missing teenaged daughter, that draws out viewers’ empathy. Surely cultural features warrant appreciation and should not be minimized or brushed off on purpose, but the normalizing and acceptance of ethnic artists in mainstream entertainment is equally important. As well, themes universal should be recognized, as depicted here in this movie.

“Searching” premiered at the Sundance Film Festival in January this year, winning the Alfred P. Sloan Feature Film Prize and the Audience Award.

Korean-American actor John Cho is convincing as David Kim, a single father. He has a good relationship with his sixteen-year-old daughter Margot (Michelle La). The two especially need each other now that Pam (Sara Sohn) – wife, mother and the crucial third person that made up the close-knit family – has died of cancer. But there are always secrets in a father/daughter relationship, no matter how loving it is.

The night before Margot disappeared, David missed two phone calls and a FaceTime from her. With no leads from Detective Vic (Debra Messing) handling his case, David knows what he needs to do when he spots Margot’s laptop left on the kitchen counter. To search for his missing daughter, David follows the digital footprints of Margot’s, exploring all avenues accessible to him on her laptop, her social media presence, chats and videos, phone and FaceTime records. 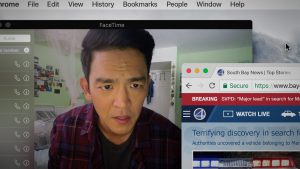 Cho delves deep into his character as a frantic father acting on hunches and raw impulses. As David Kim, Cho’s performance is engaging. He is not satisfied with ready answers and speculations offered by Detective Vic, madly driven by the stubborn persistence only a frantic father would exude. Cho himself leaves no traces of his previous roles as Sulu from “Star Trek”, or Harold in the stoner flicks “Harold and Kumar” a decade earlier.

Front and center in “Searching” is the mode of storytelling. Director Aneesh Chaganty and his co-writer Sev Ohanian show us an innovative mode of storytelling by using the computer screen and cell phone, something that is so natural in our digitalized everyday reality. Chaganty could well have kicked off a new movie genre. To be effective as a suspense thriller, the virtual, digital mode of storytelling is an effective means especially from a tech-savvy director. Chaganty’s previous work is a 2:30 minute take with Google Glass which is undoubtedly his directorial debut.

The director’s putting the computer screen in our face works surprisingly well as we stare at the huge screen inside the dark movie theatre, sharing the journey with a desperate father. The computer screen is our portal to the characters and reveals the twists and turns of the story. The webcam frames the point of view. The text messages – their typing and deleting – lead us to capture the nuances of emotions and inner thoughts. Chaganty’s style is fresh and contemporary, relevant and slick.

One inconsistency, forgivable considering this is a first feature, but still obvious and makes a little dent on the overall quality of the production. The bruise mark on David’s jaw after an altercation appears on different sides at different times. Just a minor spoiler.

Chaganty has opened a new way of filmmaking and offered a refreshing and contemporary feel to viewers. “Searching” is a worthy attempt. I can foresee more of this kind of features coming out. The caution is not to churn out gimmicky works using readily accessible digital gadgets, such as the Google Glass which Chaganty had mastered so ingeniously before making his first feature film. Grounded innovation may be two opposing concepts but could well be the key to future productions.