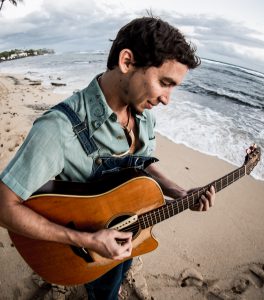 Minneapolis (Sept. 6, 2017) — The greatest slack key guitarist of his time has a Minnesota connection.

Makana, who was born and raised on Oahu, said his mother is from Hawai‘i, and that his father is originally from Minnesota.

“He was from Minneapolis,” said Makana by phone on Wednesday.

Makana is currently on tour and will perform at 7 p.m. Monday, Sept. 11 at the Dakota Jazz Club & Restaurant, 1010 Nicollet Mall, Minneapolis. He will perform with John Cruz, a lifelong friend and a musical legend in his own right.

“The Dakota is a great sounding club,” Makana said.

Cruz was raised in a renowned musical family on Oahu, said Makana, who played professionally with Cruz as a teenager in one of his bands and considers him a mentor of contemporary folk music. The two have different sounding voices that create a unique harmony together, he said, and they will be playing contemporary folk along with classic Hawaiian and original music.

“When we sing together it’s really beautiful,” Makana said. “This show is going to be special playing with John Cruz. It is a reunion of sorts.”

This tour focus is on Makana’s musical roots. It will include the music that he and Cruz grew up with including a lot of the classics.

“A lot of people who come to watch us want to have a connection to Hawai‘i, or they are just curious about the guitar style and we deliver that vibe,” he said.

Makana was considered a slack key prodigy who started singing at age seven and was performing slack key guitar professionally by age 14. Tutored by slack key legends Bobby Moderow Jr. and the late Sonny Chillingworth, Makana said he continues to preserve the ‘ohana (family) of classic composers and songs along with evolving the tradition with his new influences.

“Slack key has been my life and I have dedicated my life to it,” he said. “I have been very blessed to start very young with this very rare art form.”

The roots of slack key and its unique sound also make it beloved for evoking a sense of time and place that is uniquely Hawai‘i, he said. As Hawai‘i changes like every other place in the world the spirit behind slack key guitar become a timeless preservation of place, he said.

“When you hear slack key it’s like a time machine,” he said. “It automatically, instantly transports you to this eternal version of a Hawai‘i that’s untouched.”

Makana said he likes to joke that it’s the most affordable trip to Hawai‘i.

Slack key has an indigenous Hawaiian musical legacy, but it is also an American folk heritage art that has very few contemporary players in the world, Makana said. The simplest way to convey it’s meaning is to compare it to what the bossanova is to Brazil or what Flamenco is to Spain, he said.

“We call it slack key because we loosen the keys and create these tunings that are basically chords,” Makana said. “When you strum them open they already sound beautiful.”

The variation tunings helps with composing by not limiting the possibilities to the muscle memory of commonly used guitar scales, he said. Each time the tuning changes there is a need to re-learn the fret board and that releases the imagination to compose creatively, he said.

“My number one passion in life is composing,” he said. “I love the mystery of it. What makes my approach to it unique is because I play in over 100 tunings.”

Slack key conveys many different moods. Most are spiritual, uplifting or fun and exciting. This became apparent to the Mainstream with the soundtrack of the 2011 film “The Descendants” (Fox Searchlight Pictures).

The music producer literally went through thousands of songs to evoke the right feel for each scene of the movie, Makana said. There was difficulty finding a melancholy piece that was the right piece for a very sad moment in the film, he said.

The producer went with Makana’s song “Deep In An Ancient Hawaiian Forest.”

“I had written a song that had conveyed more of that dark sadness in slack key,” he said.

Perpetuating the traditions of the ‘ohana styles is important but so is adapting slack key to bluegrass, jazz, blues, reggae and other musical genres from other cultures, he said. After opening for rock bands he blended slack key and hard rock in the album “Introducing SLACK ROCK.”

“Because of the technical approach of slack key, I can interpret things in a unique way and that is also part of my show,” he said.

Activism is another part of Makana’s life. He recently completed a national tour working with the Center for Biological Diversity, an environmental action group. He is now taking time for himself to compose and focus on his music, he said.

“Right now I am not involved with any specific action, but I have been on and off consistently for many years,” Makana said. “I have tried to use my art in a way that supports the principles that I value.”

Makana became famous for wearing the “Occupy with Aloha” T-shirt while performing at the 2011 Asia-Pacific Economic Cooperation (APEC) gala in Honolulu. President Barack Obama was among the attendees.

Makana was a TEDx talk presenter and in 2011 as the “Occupy Wall Street” movement grew, his YouTube song “We Are The Many” went viral in support of the Occupy movement.

“In terms of the occupy thing, part of why I said I fight with Aloha was because I was telling the government they are occupying these lands and they need to exercise the law,” Makana said. “It’s a sad state of affairs when leaders come and in a way criminalize the population. Some very sad things happened in that time but for me art is a way for people to inspire people to become curious about perspectives beyond their own.”

Makana said he jumps on issues early but doesn’t tend to stick around once the message get’s lost when people start yelling and screaming at each other.

“If we yell at each other and dehumanize each other then it doesn’t bring any kind of positive outcome for anyone involved,” he said. “I try to dignify other people in what I do and that doesn’t mean I don’t take people to task, but rather than focus on people I try to focus on principles and policy and in my art specifically.”

Bob Dylan is one of the greats who took a very personal approach to blending his art with activism, and is a great influence, Makana said. Education with inspiration helps to address conflict in a world where partial understanding is clouded by misunderstanding, he said.

“People have got these really strong positions that are often not informed, especially with the Internet now,” he said. “I am not big on yelling at people or demeaning them or telling someone they are wrong.”

Makana was also a Bernie Sanders supporter and provided a campaign anthem, “Fire is Ours.” After the elections were past he turned his attention to more on long term music projects. This includes a lot of research and solitude on Kaua‘i, where he lives off the land as much as possible, he said.

“As an artist it is really important to put back in and not just constantly have an output,” he said. “It’s just such a blessing eating from all the farms that surround me and I’m just so grateful to have that luxury of access to home grown local food.