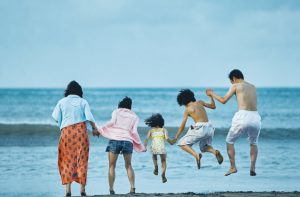 TORONTO (Sept. 19, 2018) — Throughout his oeuvre over the past decade, prolific Japanese director Hirokazu Kore-eda has been asking the question “What makes a family?”

Kore-eda addressed the topic of parenting head on in “Like Father, Like Son” (2013), and sisterhood more quietly in “Our Little Sister” (2015). “After the Storm” (2016) offers yet another intimate angle. But “Shoplifters” brings us back to his 2004 feature “Nobody Knows,” which depicts the young and disenfranchised, the invisible members of society.

The 2018 Palme d’Or winner is one of the highly anticipated selections at the 43rd Toronto International Film Festival earlier this September, where it had its Canadian premiere.

“Shoplifters” depicts a family that lives like squatters in a shack of a living space in the city. Grandma’s (the venerable Kirin Kiki) minimal pension seems to be the only legitimate, regular income while other members earn by whatever means they could find, for the young woman Aki (Matsuoka Mayu) it’s exchanging sensual intimacy; for ‘the man of the house’ Osamu — played by Kore-eda regular Lily Franky in one of his best performances — and his boy Shota (Jyo Kairi), it’s petty crimes like shoplifting, and they are good at it.

But Kore-eda is quick to show us that these seemingly shady characters have a heart. One night while walking home, Osamu and Shota come across a little girl (Sasaki Miyu) outside in the frigid cold. Abandoned or runaway, no matter, she’s all alone. Their immediate response is to lure her to go home with them and snuggle into their cramped living space, adding one more mouth to feed. 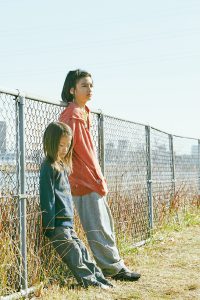 In typical Kore-eda style, the story unfolds with deeply affective, relational rendering. This includes the sharing of meals as the family huddle together, sipping and slurping around a steamy pot. But the addition of the girl Juri changes the relational dynamic; her presence elicits genuine care and love from all members, and maybe a little ambivalence for the boy Shota.

Juri follows Shota like an older brother, and the family enjoys what other family does, albeit it is nothing but normal. The scene at the beach is beautifully rendered, a perfect picture of a family outing where everyone truly feel they belong.

Kore-eda is a masterful storyteller. Just as we’re complacent and pleased with how this peculiar family goes on, secrets begin to spill due to an unexpected incident. Layer by layer we’re led into stark, riveting realism. 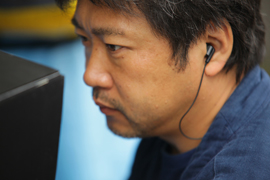 Not only does he challenge the conventional meaning of a family, here in “Shoplifters,” Kore-eda is also explicit in his social commentary on poverty, parenthood, child abuse and disparity in his society. Thought-provoking questions are asked directly by the characters, naturally within the context of the story, minimizing the otherwise contrived and melodramatic effects, such as this from Nobuyo, (Ando Sakura), the woman of the house: “Do giving birth automatically make you a mother?” A parallel to the question explored in the changeling story of “Like Father, Like Son” (2013), while there, asked of the father.

The last section showcases Kore-eda’s directing skills in engaging his viewers with twists and unexpected turns, letting the story flow out like torrents to a resolved but heart-wrenching end.  This film deserves multiple viewings.