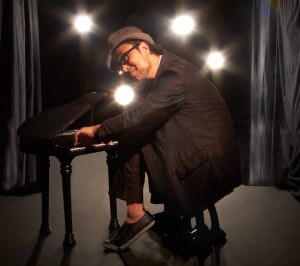 HONOLULU (March 8, 2016) — Major Japanese pop artist and jazz pianist Senri Oe will hold a series of benefit events in Honolulu on Wednesday, May 4 and Thursday, May 5, in honor of the fifth anniversary of the Tohoku earthquake and tsunami.

As of Feb. 15, 2016, there are 15,894 people known to have lost their lives, another 177.866 people have been evacuated from their homes, and 2,562 more people are still missing. Five years after the disaster, residents are still recovering.

Major Japanese pop artist and jazz pianist Senri Oe will hold a benefit concert to raise funds for the victims of the tragic tsunami. Other special guests include Junko Yagami, Manoa DNA, Miki Orihara, Misa Ogasawara and Honoka & Azita. The events will be officiated by Billy V and Sharen Nakashima and are sponsored by the Honolulu Design Center, Inspiration Furniture, Stage Restaurant and Tea at 1024. All proceeds will go to Rainbow For Japan Kids, a Hawaii non-profit that provides aid and support to children orphaned or negatively impacted by the earthquake and tsunami.
The events are as follows:

Tickets can be purchased online at http://www.hawaiiseniorlife.org/concert2016 and event inquiries can be emailed to the Senri Oe Tohoku Tsunami Restoration Fundraiser Project Office, [email protected], or by calling (808) 221-1865. VIP packages are also available.

“It has been 5 years since the Tsunami disaster. But please don’t forget that the victims are still going through hard times. Buildings and things that have a form have recovered, but the victims are still hurt emotionally. We appreciate your support through the wonderful Senri Oe’s concert,” said Hiromi Okada of Rainbow For Japan Kids Committee.
About Senri Oe

Senri Oe is a best-selling Sony Music recording artist who first hit the Japanese music scene as a lyricist, composer and arranger in 1983.  Well-known in Japan as a pop artist and actor, Oe made the transition to a jazz pianist in 2008.  He now resides in New York City where he performs at famous jazz venues such as Tomi Jazz, Zinc Bar, SOB, and Blue Note.  His debut jazz album “Boys Mature Slow” has generated rave reviews and received the “Album of the Year” at the Jazz Japan Awards in 2012.  His second jazz album “Spooky Hotel” went to the top of the Billboard Japan Jazz Charts and he was a featured artist at the 2013 Tokyo Jazz Festival.
About Rainbow for Japan Kids

Rainbow For Japan Kids brings Japanese children directly affected by the March 11, 2011 Tohoku earthquake and tsunami to Hawaii for rest, recuperation, and physical/psychological relief since July 2011.  The healing and educational program includes exploration of Hawaii’s natural beauty, participation in group activities and Hawaiian cultural programs, and the opportunity to interact with local children and schools.  A major goal of the program is to promote lasting relationships between participants from Japan and program hosts in Hawaii.  The program also will benefit the close relationship between Hawaii and Japan. For more information, visit www.rainbowforjapankids.com.