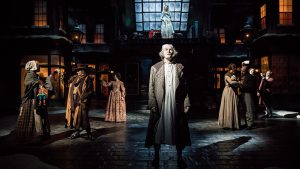 The cast of A Christmas Carol play through Dec. 30 at The Guthrie Theater. (Photo by Dan Norman)

MINNEAPOLIS (Nov. 26, 2017) — “A Christmas Carol,” the seasonal holiday favorite told with song and dance, is currently running through Dec. 30 at The Guthrie Theater in Minneapolis.

The long-time favorite play tells the story of a miserly, quickly aging and unloved Mr. Ebenezer Scrooge, who is forced to reflect back on his life of self-perceived tragedy. The holiday story line combines elements of tragedy and hope, which is easy to relate to.

The characters Ebenezer Scrooge (played by Nathaniel Fuller) grew emotionally bankrupt, despite being financially well off. Scrooge’s quest for wealth results in love loss, broken relationships and finally complete isolation. It is the backdrop for the Charles Dickens inspired tale where the play begins.

This year’s 43rd production that is adapted by Crispin Whittell and directed by Lauren Keating. It seemed quick-paced and reconfigured. Some scenes seemed consolidated and dance numbers were shorter than I remembered from past productions. Even so, Sophie Jones, who plays Tiny Tim, opened the play with her small and silvery voice, which immediately softened my heart. Following Tiny Tim’s perfectly pitched performance, the stage filled with upbeat songs and contemporary dance numbers.

The dance numbers, choreographed by Matthew Steffens, had bubbly tempos and livened the mood. Dancers were precise in movement and in absolute synchrony. The scenic backdrops moved seamlessly from Scrooge’s home to his neighborhood. The performances of the ghosts themselves were convincing, especially, Ansa Akyea who brought delightful humor to his character. But, the highlights for me this year were the performances by Aimee Bryant who played Mrs. Fezziwig, Leah Anderson who played Kitty Belle and Eric Sharp who played Mr. Wimple. True to the character of Mrs. Fezziwig, Bryant manifested a quirky and silly Fezziwig. Anderson portrayed a seasoned Kitty Belle, who nostalgically reminded me of relationships left behind. Finally, Sharp captured both empathy and contempt within one multidimensional character.

I’ve had the honor of attending “A Christmas Carol” several times. There are some noticeable stylistic changes and yet the performers continue to artistically manifest characters as both convincing and full of passion.