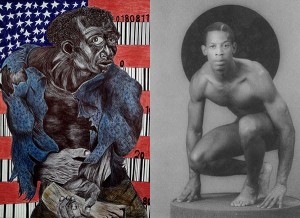 “Every day I live above ground is a good one. Every day,” as the artist Felix Hampton Brown likes to say. He’s been on the grind since he won first prize for an open mic night at New York’s Apollo Theatre in 1985. Standing before you today, wearing a personally tailored suit, Felix is the first to tell you that he’s been incarcerated, kicked drug habits, and earned awards for his paintings and sculptures.
Paranoid Giant, the title of Felix’ newest body of work, names his most important audience. Like the medieval court jester, Felix plays to the king, the paranoid giant that is the American ruling class. Felix serves his work like a sugarcoated bitter pill, a deliberate mixture of enlightenment and entertainment that addresses the New Jim Crow laws that abuse our black and brown citizens of these United States.
Featuring live music by Joe Davis and the Poetic Diaspora,original spoken word, and elements of speeches from Malcolm X, Martin Luther King Jr., and Charlie Chaplin’s The Dictator, Felix’ Paranoid Giant tells the story of his life serving in the Army, sipping from the cup of fame, living on the streets, and ascending the next mountaintop, all while singing his song.
612-817-2771
[email protected]
wingyounghuie.com
Share