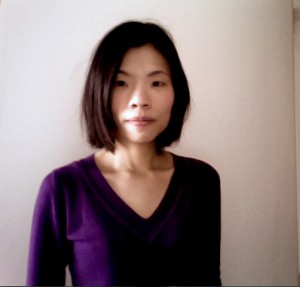 PARIS (May 21, 2013) — Fiona Sze-Lorrain has published a new book of poetry. My Funeral Gondola was released on May 20, 2013 as a Mãnoa Books title from El León Literary Arts.

In My Funeral Gondola, Sze-Lorrain takes on departures and rifts in a lyrical voice that reclaims the personal and the universal. As if to subvert expectations in narrative, memory and experience, these poems speak through their restraint to the meditations, bittersweet struggles, and inner intensities of an existence that trusts the music, the distance, and the timeless.

“I was also working on different possibilities of silence and images in terms of lyricism or poetic accidents,” says Sze-Lorrain.

The book cover image is Nuages in (détail), a painting by Claude Monet from the Musée de l’Orangerie in Paris.

It is evocative of the impressionistic feel in Sze-Lorrain’s poetry.

My Funeral Gondola is the second book of poetry from Fiona Sze-Lorrain. Her debut collection of poetry, Water the Moon, was published in 2010.

In addition to her own writing Sze-Lorrain translates poetry and non-fiction in English, French and Chinese. Her translation includes several contemporary French and American authors, and contemporary Chinese poets from Zephyr Press. She co-edited the Mãnoa anthologies, Sky Lanterns (2012) and On Freedom (2013), both from the University of Hawai’i Press. She is currently the editor at Cerise Press and Vif Éditions. 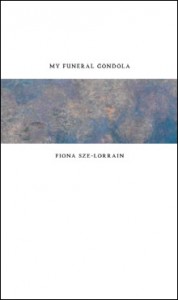 Sze-Lorrain received her university education as a scholar at Columbia University, New York University and Paris IV-Sorbonne, where she obtained a PhD in French. She lives in France.

In 2004, Sheng Productions (The Chinese New Yorker) featured a 30-minute documentary that showcases her artistic career.

When the Title Took Its Life

My saddest lines
wish to know how they left
this pen

and why I imprison them
in corridors
along margins. Abbreviated

but exhausted from labor.

Tonight, they wreak revenge
on my mortal hand —

Write, “I don’t know
why I am sad.
Night is long. Like an empty house
with annexes of silence.”

Or bar with a slash
words like “bleeding,”
“persecution,” “exile,” and “loneliness.”

Like a blind judge, these lines
doubt my sincerity.
Here is not life.

The sickle moon looks down.

What does it know? The storm
I heard when I meant
to be writing.