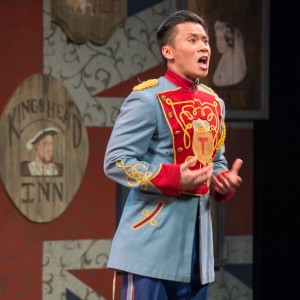 ST. PAUL — Disappointed music-lovers who missed Skylark Opera’s sold-out, smash summer hit, The Mikado, have a second chance on Sat. Oct. 26 when Twin Cities Opera Guild, Inc. (TCOG) features highlights from this extraordinary production at the 52nd Candlelight Dinner fundraiser for opera education programs at the Edina Country Club, 5100 Wooddale Avenue S., Edina, MN.
The after-dinner program opens with a rare performance of Skylark Opera’s school program, Opera Demystified, performed by Christina Baldwin and Jennifer Baldwin Peden, with Artistic Director Steve Stucki on piano.
Leaders at Twin Cities Opera Guild were lucky to see Randy Reyes, Phong Nguyen, and others perform under the artistic direction of Rick Shiomi, founder of Mu Performing Arts, and Steve Stucki, artistic director of Skylark. They quickly moved to book them as the featured entertainment at our 52nd Annual Candlelight Dinner to raise money for music education grants.
“We are grateful that Professor Josephine Lee, the University of Minnesota author of “The Japan of Pure Invention: Gilbert & Sullivan’s The Mikado”, will also be attending the dinner with two signed copies of her book on the Silent Auction,” Randy Reyes said. “It is an impressive story about how those two organizations explored the cultural context of the original play and twisted it to encourage audiences to explore diversity while having a fabulously fun time.”
The Mikado – With a Twist, features highlights of the celebrated collaboration between Skylark Opera and Mu Performing Arts with original cast members Randy Reyes, Phong Nguyen, Alex Richie, Suzie Juul and Corissa Leonard, joined by Sara Ochs and Lara Trujillo. The special program will be directed by Rick Shiomi, Ivey Award-winning founding artistic director of Mu Performing Arts, and will be accompanied by Stucki. The “twist” refers to the staging of Asian American leads in a British-themed operetta, the opposite of Gilbert & Sullivan’s traditional staging since 1885. Word-of-mouth excitement for the re-imagined show sold out every performance before opening night, and won critics’ praise.
“We moved the event from Buckingham Palace to the Edina Country Club for the convenience of all the people who are clamoring for a ticket, and therefore the wearing of crown jewels and formal attire is now optional,” said TCOG President Judy Berge. “Proceeds of this important event annually replenish our music education outreach fund that last year awarded $67,650 in grants and involved 14,563 students. We believe music is fundamental to a well-rounded education for everyone.”
The British-themed fundraiser will feature live Buckingham Palace Guards and complimentary bottles of Minnesota-grown wine dressed like the Queen’s Royal Guard, offered in partnership with Alexis Bailly Vineyard of Hastings, MN. Festivities begin at 5:30 p.m. with a silent auction and social hour. Fine dining begins at 7:30 p.m. Ceremonial Host Eileen Manning will preside over the performance, which begins promptly at 8:30 p.m.
Reservations or tax-deductible donations can be made online at www.twincitiesoperaguild.org. Tickets start at $150, however under age 30 and music teachers can purchase tickets for $100.
The Twin Cities Opera Guild, Inc., an independent non-profit organization, is dedicated to opera education and outreach, both in the schools and for the general public, in the seven-county metropolitan area and throughout the State of Minnesota.  Examples of grant programs include: musical productions staged by students who work on their own sets and costumes and perform as members of the orchestra and cast; special student matinees at operas produced by the Minnesota Opera and other local performing groups; artists-in-residence programs; scholarships to young singers through the Metropolitan Opera National Auditions program; support for youth choirs; and other established programs for young singers.