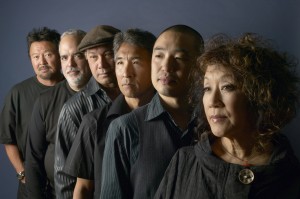 SAN FRANCISCO  — OK, we have a new CD.  And we’re working on our website-we’ve got things we are going to try on our site that we’re pretty excited about.

Oh, and we’d like to mention tour dates for this New Year of the Horse.

First things first, our 19th CD, “J-Town Beat,” was released the end of September. It’s actually a liberating project for us. it’s the 2nd CD on our own with no record label control and I kind of think it feels that way musically.

Its us revisiting our roots, doing some musical commentary on culture(s), having some fun, and even adding a Terry Steele vocal track. And can you believe that’s June singing at the beginning of “Red Buddha?”

If you get a chance you can read about the project in ‘Stories Behind The Songs,’ in the Community section of our website. Some reviewers are saying its one of the best CDs we’ve ever made and stuff like that. Its in its 3rd week on the Billboard radio charts at #22 and climbing.  Please check it out and let us know what ya thinks?

The 19th CD from Hiroshima, “J-Town Beat,” was released in September. (Photo by Jaimee Itagaki, with cover art by Design Q Yamashita)

You know our website has sort of had us tripped out for a while. Being kinda late to the whole techno scene, we weren’t sure where it all fits into our vibe. Well we have learned that it’s really ‘home base.’ That its the best place to communicate, inform, dialogue and generally to build an internet ‘community.’  So we are all-in to make it inviting and entertaining.  Please help us.

Your comments/suggestions/even criticism (be gentle?) are vital for us to grow and make it a place you want to regularly visit and hang. In the very near future you can dialogue with us in community at Blah, Blah Blogz, see more new videos on our YouTube channel and we are even in the process of creating our own music station, programming stuff we dig and sharing it with you all, guided by the long time Bay Area Quiet Storm guru, John Chung. With your help we hope to make it hip!

Before I mention our tour dates, I forgot to tell you that we are planning a variety of recording projects. In no particular order–a second Holiday CD/ finishing our first session series with VINX-doing a few more in fact / start writing our next CD/ and even the prospect of our long-awaited “Songs With Words” project—a collection of our favorite vocal tunes re-recorded all in one CD.

Finally our TOUR dates. They are slowly coming in (hey, its been tough out there!) but if you see us every year (domo!) you’ll see us again this year on our J-Town Beat tour, and hopefully we’ll be in a number of cities and venues we haven’t hit for a long time.

We will be in the great state of Texas this month with a show in Austin 2/13 at the intimate One World Theater, and a very special Valentine’s Show Friday Feb. 14 at Dosey Doe’s in Houston. Please join us!

So it’s the Year of the Horse–and as you can see—time for us to get busy!

J-TOWN BEAT is now available on the Hiroshima website at www.hiroshimamusic.com, or on iTunes, cdbaby and Amazon.

www.facebook.com/junekuramoto, and Twitter at http://twitter.com/hiroshimamusic Hiroshima and its album, “Legacy” (Heads Up International label) was nominated Album Of The Year in the Best Pop Instrumental Album. The award went to Booker T. Jones for his “Potato Hole” recording (Anti label).

Hiroshima’s debut album in 1979, the self-titled Hiroshima, contained the single “Roomful of Mirrors,” which caught the ear of the “easy-listening” community.

Hiroshima became popular in the New Adult Contemporary community upon the release of its 1985 album Another Place, which spawned the crossover hit “One Wish.”