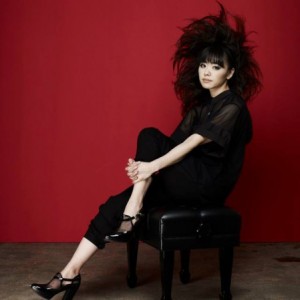 Stunning keyboard virtuoso Hiromi took the jazz world by storm with her 2003 debut, Another Mind. Since then her blinding technique has just gotten better, her songwriting is more focused, and her projects have increased in scope and exposure. Mentored by jazz piano legend Ahmad Jamal, Hiromi is taking her music into uncharted territory.

While she has maintained a busy performing and recording schedule with her acclaimed Sonicbloom Quartet, she has also taken time to pursue some other performing opportunities. Her 2 disc duet record with Chick Corea was released in 2009 to rave reviews, and she has taken the keyboard chair for Stanley Clarke’s acoustic trio record as well as his most recent electric record (the latter of which won a 2011 Grammy Award for Best Contemporary Jazz Album).

In 2010, Hiromi became the first nationally touring artist to play the Dakota four times in a 12 month span: with 4 different ensembles! She visited with her stunning Sonicbloom Quartet in June 2009, returned with Stanley Clarke’s Trio (with Lenny White on drums) in October 2009, played four solo shows in March 2010, and returned with Clarke as a duo in June 2010.

“…her performance is a blow-your-hair-back display of drama and athleticism.” -CNN

Anthony Jackson has been a distinctive voice on the electric bass ever since he entered the scene in New York City. He began learning the piano as a teen before switching to the guitar, and finally picking up the bass after being influenced by legendary Motown bassist James Jamerson. He has had more than 3000 recording sessions with more than 500 albums.

Steve Smith
Steve Smith’s drumming, while always decidedly modern, can best be described as a style that embodies the history of U.S. music. His original love of rudimental parade drumming is evident in his intricate solos. Likewise, his command of jazz, from New Orleans music, swing, bebop, avant-garde to fusion, is applied with his powerful rock drumming sensibilities and allows him to push the boundaries of all styles to new heights. His musical focus is committed to the exploration of improvised music incorporating styles as diverse as Blues, Jazz, R&B, Funk, Cajun and South Indian Carnatic.

What Other People Have Been Saying…

“One of jazz piano’s most brazenly virtuosic players.” -JazzTimes

Tickets are $45. Call the box office at 612-332-5299 or visit http://www.dakotacooks.com/event/hiromi-the-trio-project. Visit Hiromi at www.hiromimusic.com.