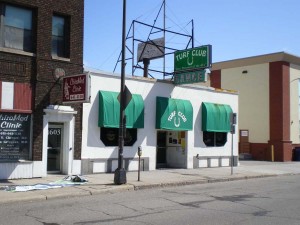 The Turf Club, on University Avenue just west of Snelling Avenue, has been sold to First Avenue of Minneapolis. The club opened in the 1940s and have evolved with nearly every shift in popular music leading to the present day. (Turf Club photo)

MINNEAPOLIS (Oct. 11, 2013) — First Avenue announced last week that it has entered into a purchase agreement with the Turf Club and have taken over as acting managers of the St. Paul, MN venue on Oct. 15, 2013.
The venue was valued for its own rich and distinct history, and First Avenue recognized the importance of embracing and maintaining what makes the Turf Club a gem of the Twin Cities.
“I’m really excited to see the next era of the Turf Club with the team coming in from First Avenue. While I am looking forward to some new investment, I’m confident it will carry on the tradition of the Saint Paul Music Club started by Rob and Leah Rule that made it such a treasure” said St. Paul Mayor Chris Coleman.
The new management plans to preserve the charm of the club, but will also be investing significantly in improvements to the venue. The “Clown Lounge” is not going anywhere, according to management.
“After eight years of owning and operating this club I wouldn’t just hand it off to any buyers. I’ve worked closely with First Ave over the years and have seen firsthand what they’re capable of,” said current Turf Club owner, Tom Scanlon. “I haven’t flinched in entrusting the club to First Avenue and I’m excited to see its continued success. “
Building on 13 years of successful booking and promoting of shows at the Turf Club, the FIrst Avenue management said they are excited to continue to bring emerging national bands and favorite local acts to St. Paul.
“Whether promoting or enjoying a show, I have spent countless nights at the Turf Club and could not be more excited about this new venture,” said Nate Kranz, General Manager of First Avenue.