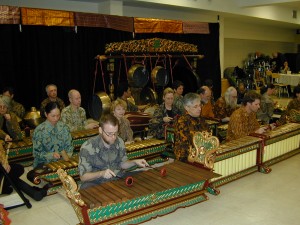 It is well-known that Claude Debussy’s music was influenced by the Javanese gamelan, but not many piano teachers have heard or seen a gamelan.

This ia an opportunity to get acquainted with this historic ensemble. The knowledge of the sounds of the gamelan will enlighten performances of Debussy’s music.

Paris was the host to the Exposition Universelle of 1889  – a momentous year in the history of France. It had been one hundred years since the fall of Bastille that was the beginning of the French revolution.

To celebrate, the French erected the then tallest structure — the Eiffel Tower. An interesting feature of the fair was the construction of many native villages to show arts, cultures and ways of life from around the world. Among the performances of various types of music from all over was a group of gamelan musicians from the island of Java, then a colony of the Dutch.

When the Dutch in their search for spices first arrived in Java almost over two centuries earlier, they heard what they called ‘mysterious sounds’, coming from the villages. When the gamelan musicians played at the Paris fair, the impression of the many European musicians who heard this music was the same.

Among them was the young Debussy who was just beginning to get known and who was establishing his own style of music. He was fascinated with the sounds of the different gongs, the counterpoint created by the different registers of sounds, the non-harmonic cyclical music punctuated at each cycle. Debussy was excited to hear this music that had been handed down orally for over a thousand years.

We in the Twin Cities are fortunate that we have here gamelan instruments and on-going gamelan classes for all ages, started first by the Schubert Club and now run by Suminar, a non-profit community group.

Joko Sutrisno, from Central Java, is the music director of the Sumunar Gamelan and will be the instructor for this workshop.

Also joining in will be Katherine Faricy, who recently gave a seminar on Debussy’s piano music, and briefly touched on the influence of gamelan on Debussy’s compositions that piqued everyone’s interest.

Faricy is currently Master Artist-in-Residence at the Mount Calvary Academy of Music in Excelsior where she teaches piano and presents seminars for teachers. She previously was a longtime member of the piano faculty at the University of St. Thomas where she taught piano and graduate courses in historic performance practices.

Attendees at the workshop “Debussy and the Javanese Gamelan” will learn about the different instruments and their functions in gamelan music. They will also learn to play a piece on the instruments.