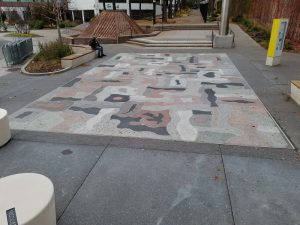 MINNEAPOLIS (Nov. 14, 2018 ) — Six public artworks are in the final stages of fabrication and will be installed by the end of 2018, including two works for Nicollet Mall, one for Bde Maka Ska and three for 26th Avenue North.

“Tableau,” an important work by Anishinaabe artist George Morrison, has been reinstalled on the south end of Nicollet Mall at the entrance of the Loring Greenway. This rare outdoor granite mosaic consists of nearly 200 individual pieces in 14 colors of granite, and includes animal, bird, weather and plant imagery. Morrison was a notable Native American artist and one of Minnesota’s most important 20th century artists, with works in museum collections worldwide.

Artist Tristan Al-Haddad has also started installation of the sculptural work “Nimbus” in front of the Minneapolis Central Library. Constructed like an airplane wing, Nimbus will be cantilevered over the Theater in the Round seating area. It was fabricated in Atlanta by a diverse team of welders, including several AWS Certified Welders from Dunwoody College of Technology who commuted there over the last several months. It will be one of the City’s largest individual artworks.

The installation of a 170-inch decorative railing at Bde Maka Ska is also nearing completion. The railing depicting crops, animals and Dakota symbols is one of three components of the public artwork planned for the gathering site on the lake. Pavement stamps with plant and animal images and their Dakota words were installed in 2017, and a website and mobile device application featuring the personal stories of descendants of the village Heyate Otunwe will be launched soon. The City partnered with the Minneapolis Park and Recreation Board on this project to honor and celebrate Mahpiya Wicasta (Cloud Man) and the village he led that thrived and farmed at Bde Maka Ska in the 1830s.Artists for this project include Angela Two Stars, Mona Smith and Sandy Spieler.

The Bde Maka Ska railing was fabricated at the Chicago Avenue Fire Arts Center along with the three new works for 26th Avenue North—a project developed in connection with the reconstruction of the street that includes a new bike trail connecting Theodore Wirth Park and the Mississippi River.

At Wirth Parkway, “Aqurbane,” an arch-like form by Christopher Harrison will span the bike trail and serve as a gateway to Wirth Park. The “Big Book” by Christopheraaron Deanes will be installed at Nellie Stone Johnson Community School and includes a story on bullying that was created in collaboration with fifth grade students, including many who currently attend Franklin Middle School. Finally, “Purple Raindrop,” Esther Osayande’s sculpture and seating area honoring Prince will be installed in Farview Park.

Once complete, all of these works can be explored, along with the City’s entire collection of public art, as part of six interactive tours that can be accessed on any mobile device.