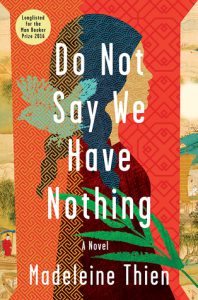 “Do Not Say We Have Nothing”
Author: Madeleine Thien
Publisher: Granta Books

CALGARY (March 10, 2017) — The U.K. based Baileys Women’s Prize for Fiction has announced this year’s longlist on March 8, International Women’s Day. ‘Do Not Say We Have Nothing’, the historical novel by Chinese-Canadian author Madeleine Thien, is one of the sixteen books longlisted to compete for the prestigious literary prize.

Previously the Orange Prize for Fiction, the Baileys Women’s Prize is now in its twenty-second year awarding annually the best full-length novel written by a woman author of any nationality. Previous winners include Ali Smith for ‘How to be Both’ (2015), Marilynne Robinson for ‘Home’ (2009), and Chimamanda Ngozi Adichie for ‘Half of a Yellow Sun’ (2007).

‘Do Not Say We Have Nothing’ is the Vancouver born, Montreal based Thien’s third novel. The literary epic tells the stories of three generations across two continents painted on a vast canvas of twentieth century China, spanning from the decades leading to Mao’s Cultural Revolution in 1960’s and onward to the Tiananmen Square protests and government crackdown in 1989.

Just a few months after its publication in May 2016, the novel was shortlisted for the Booker Prize and won two of Canada’s top literary awards, the Scotiabank Giller Prize and the Governor General’s Literary Award for fiction. Thien’s first book ‘Simple Recipes’, a collection of short stories, as well as her previous two novels ‘Certainty’ and ‘Dogs at the Perimeter’ had all garnered numerous international accolades.

Thein’s father, a Malaysian Chinese, and her Hong Kong mother immigrated to Vancouver, B.C. in 1974, the year she was born. Thien was a dance student at Simon Fraser University, later studied creative writing at the University of British Columbia. In 2008, she was invited to participate in the renowned International Writer’s Program at the University of Iowa. When the MFA Creative Writing Program at the City University of Hong Kong started in 2010, Thien was one of the inaugural instructors there until the program was abruptly terminated in 2015 on the heels of the students led ‘Umbrella Revolution’.

The shortlist for the Baileys Women’s Prize will be released April 3rd and the winner announced June 7th.

Read Diana Cheng’s review of “Do Not Say We Have Nothing.”