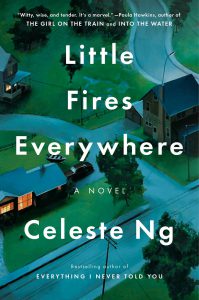 Chinese American writer Celeste Ng (伍綺詩) had garnered numerous accolades for her debut novel “Everything I Never Told You”, including a New York Times Notable Book of 2014, Amazon’s #1 Best Book of 2014, winner of the Massachusetts Book Award, and the Asian/Pacific American Award for Literature, just to name a few.

Like the stunning opening in her debut work, Ng in her second novel “Little Fires Everywhere” begins with a dramatic scene: Mrs. Richardson, after being awaken by smoke detectors, stands on her front lawn in her pale blue robe and watches firemen saving her house from total burnt down. The prime suspect of the fire is her youngest daughter Izzy. With that, Ng leads us into the story of the Richardson’s, an upper-middle class family living in the quiet suburb of Shaker Heights, Ohio, which was Ng’s hometown during the 90’s.

The thematic elements of race, parenthood, and family secrets leading to devastating consequences as in her debut novel are carried over. Covering a larger scope, “Little Fires Everywhere” expands to other issues as well, offering us views into a myriad of realistic characters and the interplay of two families, specifically, two mothers holding opposite values. Ng’s riveting storytelling skills carry us through the various plot lines breezily, while taking the time to breathe life into her characters, and deftly locks us into mental debates on contentious issues. Although set in the 90’s, the issues raised are as relevant today.

The Richardson family, one could say, is the epitome of the American Dream. They live in a six- bedroom home in a desirable part of town. The matriarch Elena and her husband Bill are well connected and respectable in the community, she a journalist with the local paper the Sun Press and he a defense lawyer. They have four teenaged children, the eldest Lexie heading to Yale. Second son Trip is popular in school, especially among girls. Third child Moody is wrapped up in his own cocoon. Youngest Izzy is the black sheep of the family. She is not happy despite her family’s affluence, or maybe, if Mrs. Richardson is willing to look deeper into her daughter’s mind, Izzy’s discontent could be exactly due to her family’s secure standing in the rule-constraining suburb. Mrs. Richardson would not trade any of her privileges, for she is living “a perfect life in a perfect place.” Her main task now is to smother any sparks that can disrupt the status quo and surface calmness in her family and community.

As the title suggests, metaphors of fire are everywhere. There are flames of passion, fury, dissatisfactions, and the fuse of suburban ennui, as apparent in the lives of the teenagers, potential fire hazards. These are all inherent threats to the idyllic, quiet town, where high school graduates are expected to head to Ivy league colleges, and where parents are oblivious to the secret lives of their teenagers, and vice versa.

The story begins not with the aftermath of the house fire, but the reason leading to it. Mrs. Richardson has just rented the upper floor of her revenue property, a duplex on the other side of town, to new tenants, single mother Mia Warren and her teenage daughter Pearl. Mia is an artist, her medium, photography. She works at menial jobs to sustain her art, and brings up Pearl moving about the country in their VW Rabbit, forty-six different towns since Pearl’s birth.

As they settle in Shaker Heights, Pearl comes to know the Richardson children and is attracted to their lifestyle. Conversely, Izzy Richardson is mesmerized by Mia’s artist life and hangs around in the duplex to help and learn from her art-making. This time, Mia and Pearl may just be settling down.

It is obvious from the start that Mrs. Richardson and Mia comes from opposing sides of ideals. While suggesting Mia take portraits for people in town to earn more money, thinking about her rents no doubt, Mrs. Richardson is confronted with the notion of the artist as a photographer, as Mia replies, “the thing about portraits is, you need to show people the way they want to be seen. And I prefer to show people as I see them.”

Mia works at the Chinese restaurant Lucky Palace to sustain a living. Mrs. Richardson offers her to work in the Richardson’s home, cleaning and cooking a few days a week to earn some extra money. Although reluctant about the proposal but to not jeopardize their relationship, Mia agrees. Hence, Mia delves further into the Richardson family life. 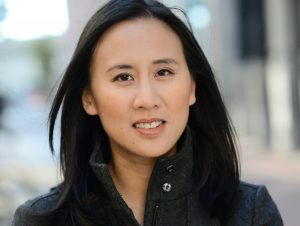 As she so deftly deals with in her first novel, Ng weaves into her storylines and characters the subjects of culture and identity. The intermingling of lives between the Richardson family and Mia soon pit them into taking two contentious sides in a prominent court case in town. The Richardsons’ best friends, the McCulloughs, have just adopted a Chinese baby found abandoned at the firehall, Mirabelle, or May Ling Chow, her birth name. The birth mother Bebe now regrets her decision which she had made in a most dire financial situation at the time. Bebe comes from China, and happens to be Mia’s co-worker at Lucky Palace. Mia is openly supportive of Bebe, while Mr. Richardson represents the McCulloughs. The case has divided the town, and now Mrs. Richardson knows she needs to dig into Mia’s past to discredit Mia and to get back at her for drawing her dear friends the McCulloughs into tormenting legal entanglements.

It is when Ng reveals Mia’s backstory that the narratives are most riveting. We are led to a moving account, a page turner even, on a subject that is complex and crucial: what makes a mother? In her novel, Ng intertwines three possible scenarios of pregnancy, wanted, unwanted, surrogate. And with these contrasting lines, she delves into the issues of adoption and identity. Are babies best brought up by their own biological mothers, especially when culture comes into play? What makes a baby Chinese? American? Or more complex still, Chinese American? The McCulloughs have well intentions to bring Mirabelle up by regular dine-outs in a Chinese restaurant, and finding her ‘Oriental Barbies’ to play with. Are these enough? If not, what is?

Cultural appropriation is a trendy topic nowadays, not only in the adoption circle, but in other realms. These are issues that require deeper pondering and research work, no doubt, ones that should be confronted deeper than Ng can deal with in her novel. Nonetheless, a fictional setting is an interesting place to spark off the debate. Just another one of her little fires in the book.

While “Everything I Never Told You” is a microscopic look at a mixed-race family during the 70’s, dense and intense, not unlike a Bergman chamber work, “Little Fires Everywhere” is looser and more expansive in thematic matters, with sprinkles of laughs here and there, not unlike a John Hughes’ movie in the 80’s. One can feel Ng is freer to roam with the larger, open space. Just as her debut work, Ng does not shy away from the issues of race and identity, while challenging the notion of ‘success’. One should not be surprised that this is still the fundamental term we are struggling to define in our society today.

NOTE: I thank Penguin Random House Canada for the reviewer’s copy of the book.