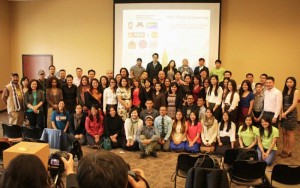 That’s one of many questions that will be asked at the 2016 Lao American Writers Summit coming to San Diego on May 27th and 28th. This will be the first time it has been held outside of Minnesota. The event will be held at the famous Centro Cultural de la Raza, located at 2004 Park Boulevard in San Diego.
Through this Summit, the organizers will provide a safe and instructive environment that identifies and addresses the unique challenges faced by emerging Laotian American writers. A public reading will be held on Saturday night. For emerging writers and non-artist participants, panels will be held to highlight the current state of Lao American arts, opportunities and experiences of individual artists and to examine the positive potential arts have on individual and community growth.

Community members will have an opportunity to meet national, regional and local arts, philanthropic and refugee service organizations, publishers and researchers who can answer questions and advise writers and artists on significant opportunities. One of the strengths of the National Lao American Writers Summit has been the ability of emerging writers to connect with other emerging writers as well as experienced writers in formal and informal settings throughout the weekend, which accommodates a wide variety of learning styles.

Space is limited to 300 people, and previous attendance has reflected a representation of a wide range of states, particularly from Minnesota, Texas, Washington, California, Illinois, Wisconsin and New York. They still have space for event sponsors, and are in the final weeks of their funding drive at http://sahtupress.com/lao-writers-summit.

“This is possible because of generous community support that believes in the power of Lao stories to create a better world for everyone,” organizers stated in a press release.

This year, Lao American publisher Sahtu Press is serving as the non-profit fiscal agent for the event in San Diego. The Lao American Writers Summit means a lot to Sahtu Press founder Nor Sanavongsay because it gave him the encouragement to finish his first book after 10 years and to create a publishing company that eases the way for others to share Lao American voices with the world.

San Diego is home to over 8,000 Lao, many who came following the end of the Laotian Civil War that ended in 1975. As the communities rebuilt in diaspora over the last four decades, it has been a challenge for many to find the time and opportunity to tell their stories in their own word on their own terms.

The Lao American Writers Summit has been a model that has encouraged Lao to value their stories and to look at the best ways to discuss their journeys so that they can leave a powerful legacy for the next generation. In 2013, the San Diego Lao community worked closely with the The Old  Globe Community Voices project to train emerging Lao American and Asian American writers for 8 weeks, resulting in a memorable performance of ten-minute plays in the community.

This year’s Summit is being organized by Krysada Panusith Phounsiri and fellow artists and writers in California. A resident of San Diego, Krysada Panusith Phounsiri is a Lao-American Artist and Engineer. He came to America with his family in 1989. He graduated from UC Berkeley in 2010 with a Physics and Astrophysics Double Major with a Minor in Poetry.  His debut collection is “Dance Among Elephants,” published by Sahtu Press. His work has been featured in the Journal of Southeast Asian American Education and Advancement and the Smithsonian’s “A Day in The Life Of Asian America” digital exhibit. He was recently nominated for Rhysling Award for his poem “It Begins With A Haunting.”

Legacies of War is an organization which seeks to address the problem of unexploded cluster bombs in Laos, to provide space for healing the wounds of war and to create greater hope for a future of peace. Previously, Channapha Khamvongsa worked at the Ford Foundation and Public Interest Projects, focusing on immigrant and refugee rights, global civil society, civic engagement, capacity building and transformational leadership. She was previously appointed to the Seattle Women’s Commission and served on the boards of the Refugee Women’s Alliance and Conference on Asian Pacific American Leadership (CAPAL).  She studied at George Mason University and Oxford University where she earned her Master’s Degree in Public Policy.