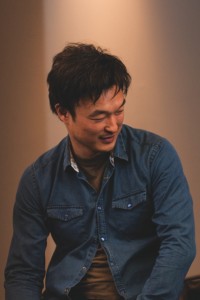 Calgary (Aug. 18, 2013) — As a second-generation Korean-Canadian playwright, actor, poet, and musician, the versatile Ins Choi has some interesting stories to tell.

Choi’s family immigrated to Canada when he was a toddler. His father’s first job was in a grocery store owned by his uncle. Choi’s debut play Kim’s Convenience is a comedy-drama depicting with humor and poignancy not just the disappearing family grocery store, but the changing family, its conflicts and reconciliation. This is not only a Korean-Canadian story but speaks to all.

Choi is taking the play on a cross-Canada tour in the 2013 – 2014 season. Another exciting prospect is that a TV comedy series of Kim’s Convenience is in the works. Further, according to CBC news, Hawaii Five-0 star Daniel Dae Kim recently saw the show during its third remount at Soulpepper and loved it so much, he wants to run it in Honolulu. The Korean-Canadian story can soon be put on the American stage.

The following is an online interview Choi has so kindly granted me, considering his busy schedule.

Cheng: What first sparked the interest in you to pursue the arts, theatre arts in particular? Who and what were your influences?

Choi: I think it was my father. He was a pastor, he’s retired now, but watching him tell stories on stage every Sunday and making people laugh, moving them to tears, inspiring them to live a better life, to be more compassionate … that, I think was the biggest influence for me to pursue the arts.

The Korean church I grew up in, my father’s church, Bethel Church in Toronto, had a youth group that was very artsy. I was one of the younger ones at the time. We’d put together shows, these coffee houses as fund raisers every year. People would write songs, skits, dance numbers, comedic sketches… etc. And they were very good. I loved the process of theatre making, the community built around a common goal.

My youth pastor, David Ryu, at the time, during one of those coffee houses did this very emotionally charged movement piece. I don’t know if anyone really understood it, but it was impactful. The courage to do something like that … at church… obviously it stayed with me. I don’t remember a single sermon he preached over the decade he was there but I’ll never forget that performance.

Cheng: When Kim’s Convenience first appeared at The Toronto Fringe Festival in 2011, you were the writer, director and actor in the play. Which role did you enjoy the most? Which was the most challenging?

Choi: I loved doing it all… writing, directing and acting but the most challenging was producing. How to get the word out and how to get people to buy tickets. That was a lot of work.

Cheng: How long did you spend in writing Kim’s Convenience? What were the major hurdles you had to overcome during the writing process?

Choi: I began writing it as part of fu-GEN Theatre Company’s playwrighting unit in 2005. But I left it many times. I gave up on it on countless occasions. The most major hurdle was continuing. Cuz no one was making me write it so… it’s tough to persevere. Writers need deadlines. My wife kept me going. She was my biggest source of encouragement.

Cheng: Do you think you need to overcome more challenges as a Korean-Canadian to succeed in the theatre arts?

Choi: Succeed? I’d say a challenge even to be ‘in’ theatre arts.

Yeah, kinda, because there are no role models, no one to look up to. Especially when I graduated from the acting program at York University, I could’ve used a conversation or two from an older Asian actor.

Cheng: You’re also a Shakespearean actor at the Stratford Festival, does your ethnicity pose an issue with getting a role?

Choi: Kinda. Casting is always tricky. It’s public, so it’s political. People will tend to read meaning into the ethnicity of a casting choice even if nothing was meant by it. This is a bigger question that requires a conversation.

Cheng: The whole setting of Kim’s Convenience is in a Korean grocery store in downtown Toronto, focusing on an immigrant family. You must be very pleased with the play’s overwhelming reception outside the Korean community. What’s in it that speaks to those who have not gone through the immigrant experience?

Choi: Everyone has gone through the immigrant experience in North America unless you’re from an Aboriginal community. Even if it’s a few generations removed.

I think what’s universal about this play is that it’s about family and about the future of a family business.

Cheng: There are a few lines in the play that are very funny but also very true for immigrant parents. In response to his daughter Janet going into photography, Kim said: “…We… hope you can be doctor, lawyer, big success, but what you do? Take picture. We don’t have to come to Canada for you take picture. Even you can take picture in North Korea.” What did your parents say when you chose to go into acting instead of the sciences or medicine?

Choi: They were worried. I think they just wanted me to not go hungry and homeless. But they always supported me. They’ve been to every single show I’ve been in. And that’s huge. I don’t take that lightly. It means huge to me that they come.

Cheng: Your Dad is a Korean church pastor, is it fair to say you have grown up in the church? How does your faith influence your writing and artistic pursuits?

Choi: Yeah. I’m not sure. My faith in God drives me to be honest with myself, to pursue excellence in my work and to be kind and generous to the people I work with. I don’t always achieve this but I try.

Cheng: As a second-generation Korean-Canadian, how do you seek the balance between maintaining your cultural heritage and being fully integrating and participating in our society today?

Choi: I don’t really think about stuff like that. I love eating Korean food. I vote. I don’t know.

Cheng: There’s a moving section in the play when Appa mentions his friend Mr. Chae’s grocery store was protected by his black customers during the Rodney King riot in 1992. Is this one of the thematic purposes for Kim’s Convenience, with its portrayal of Korean and black characters engaging in harmonious relationships to reconcile these two groups?

Choi: We’re working on it.

Cheng: Are you writing the screenplay?

Cheng: What are your upcoming projects?

Choi: A solo show about a homeless man delivering a message from God through his spoken words, poetry and songs. It’s called Subway Stations of the Cross. In Calgary Oct 2-6, 2013 at Fire Exit Theatre.

Cheng: Any plans to take Kim’s Convenience the play to the U.S.?

Choi: We’re working on it.

Cheng: All the best in your cross-Canada tour with Kim’s Convenience and your future projects. Thank you so much for your time.

Kim’s Convenience speaks to Americans and Canadians alike, for we are a continent of immigrants, a continent always in search of how we can all get along despite our differences in views and cultures. Let’s hope Ins Choi’s works can one day reach the American stage and TV screens.