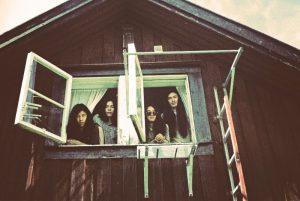 NEW YORK (March 9, 2017) — Kikagaku Moyo announce their spring North American tour, to follow the release of their new EP ‘Stone Garden,’ out April 21st via Guruguru Brain. The tour will kick off in Philadelphia on May 2nd, and will take the band from the East to the West Coast.

‘Stone Garden’ started in a basement studio in Prague with a nearly continuous session over several days and nights. The original concept was influenced by the raw and seemingly endless jams of psychedelic pioneers. The freeform songs that emerged from those sessions were refined over several months at the band’s home in Tokyo where each song was sculpted into an uncommon form.

Compared to their relatively song based previous LP ‘House in the Tall Grass,’ ‘Stone Garden’ is a window into Kikagaku Moyo’s experimental side.  While improvisation is essential to their songwriting process it can take on many forms. This record enabled the band to experiment not only with instrumentation but also atonality and a playful approach to mixing.  The unexpected results have become five unique songs each woven together through the same process.

Kikagaku Moyo/幾何学模様 (Japanese for Geometric Patterns) is the musical union between five free spirits. Go Kurosawa (drums, Vocals) and Tomo Katsurada (Guitar, Vocals) formed the band in 2012 as a free artist’s collective. They met Kotsuguy (Bass) while he was recording noise from vending machines and Akira (Guitar) through their university. Ryu Kurosawa had been studying Sitar in India, upon returning home he found the perfect outlet for his practice.

They recorded their first EP in a day and posted it to Bandcamp.  On the other side of the world, a small label from Greece was listening and offered to press a limited run of LPs.  Interest picked up through the blogging community and the band found tight group of dedicated fans around the globe.  Since 2013 the band has released two full lengths, an EP, and several singles. They have toured Australia, the United States, Europe and Japan extensively.  Kikagaku Moyo love to connect with people through performing, whether they are playing in a barn deep in a Swedish forest, on a desolate Mediterranean beach, or beside a sleepy river at 2014’s Levitation Fest they bring out the magic in everyone present. 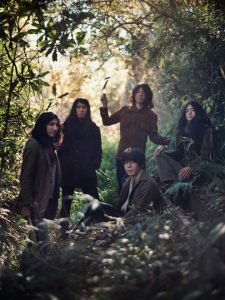 Their delicate use of melody and soft vocal harmonies contrast seamlessly with fuzzed out sitar riffs and feedback. To Kikagaku Moyo a song is like a breath of wind through the leaves or a fish jumping from the water. Their music is a conversation–sometimes delicate and tender other times explosive, but always human and always changing.