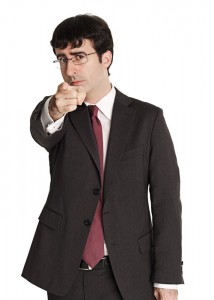 MINNEAPOLIS (Oct. 12, 2013) — John Oliver, political comedian from New York City performed at the State Theater on Saturday to a full house. After reviewing three previous plays/shows this week, I was more than happy to end Saturday evening enjoying Oliver’s intelligent and comedic humor.

Out of the gate Oliver inquired about Minnesotan’s dressed up like Zombies. He asked the audience, “Is it real or am I just seeing Zombies?” He wasn’t aware that zombie like people were wandering the city for various events including Saymoukda Vongsay’s “Kung Fu Zombies  vs Cannibals” premier at The Southern Theater, a Mu Performing Arts production.

Oliver quipped that Minnesotans were transforming into zombies was due to another term of U.S Congresswoman Michelle Bachman. Immediately, laughter roared and filled the theater.

Next, Oliver threw out the topic of puppies peeing in the house, which is an experience most people can relate to, even if you don’t have a pet. He stated that his puppy was so happy to see him come home one time that it peed on the floor. Oliver followed up with, “How come no one here is ever this happy to see me?” Again, another hit! Laughter filled the theater.

Oliver’s stand up routine included politics, every day life tasks, recreational activities and poking fun of Minnesotans. He also included topics related to the Government shutdown, which were an easy target on this night. His quick wit, seamless humor and intellectual dialogue were a delight. Not only did he make us laugh, he educated us about global politics as well.

His ability to weave politics, global issues, issues related to race, finance reform, health care and politicians didn’t surprise me. On, The Daily Show, which he hosts for HBO, Oliver pokes fun of politics in a way that allows people to discuss more freely what might be very tense issues. He moves beyond partisanship and dives right into humorous possibility and cynicism. His common sense approach to repairing global and hard economic times are unique. Yet, John Oliver filled the time with intriguing and an indescribable monologue that made the ninety-minute stand up routine feel like ninety seconds.

The richness of Oliver’s material kept us truly engaged throughout. He did a comparative analysis of regions on the globe such as Europe, the United States, Australia, Sri Lanka and Lebanon. It was unbelievably clever and light, which served to bring people together rather than apart. Oliver’s imaginative mind is truly artistic. He did a genius job of discussing current political issues about deception, fabrications by our nations leaders and moral integrity in a way that allowed us to exhale for this short amount of time.

Minneapolis was more than enthused to welcome him to the stage and disappointed when the show came to a sudden halt. Throughout our time together, Oliver became our friend, an ally, voice for the people and someone we could trust enough- to move through current political treachery and into a collective sense of humor.

In fact, Oliver was so effective that the family arguing behind me for thirty minutes prior to the show starting stopped fighting when he arrived on stage. It was a huge relief for us sitting in front of them. Oliver transformed the painful perspectives of the human condition and systems and was able to turn them into the hilarity and absurdities they really are.

Comedian John Oliver, I hope you come back soon! No one in the place left like a zombie. Instead, Minneapolis left rejuvenated, exuberant and full of cheer.