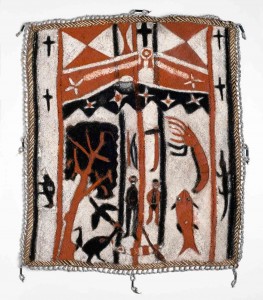 St. Paul, Minn. (March 26, 2014) — How the Second Vatican Council influenced the work of American Crosier missionaries in a remote region of Papua, Indonesia, especially in connection with the art and culture of the Asmat people who live there, is examined in in the American Museum of Asmat Art’s latest exhibition at the University of St. Thomas.

The Second Vatican Council, which closed in 1965, promoted religious dialog and supported anthropological efforts to understand and work with Asmat cultural traditions and spiritual beliefs.

The exhibition, “Museums and Mission: American Crosiers in Asmat and the Spirit of Vatican II,” is free and open to the public and can be seen April 1 through Dec. 19 in The Gallery, located on the second floor of the Anderson Student Center on the university’s St. Paul campus.

A reception with the six graduate art history students who curated the exhibition will be held at 5 p.m. Monday, April 7, at The Gallery.  The students are Bret Campion, Angela Daniels, Tongtong Guo, Kathryn Joy, Chelsea Lynch and Dakota Passariello. They developed the exhibition as part a graduate seminar taught last semester by American Museum of Asmat Art director Dr. Julie Risser.

The exhibition also includes seven photographs of Asmat life taken last fall by Joshua Irwandi from Indonesia. He is pursuing a master’s in photojournalism and documentary photography at the London College of Communications. Irwandi will discuss “Covering Asmat” in a 4 p.m. talk Tuesday, April 8, in Room 202 of the Anderson Student Center. The talk is geared toward students who hope to travel and do research, whether in Asmat or other regions, and will address practical and ethical issues involved with photographing other cultures. 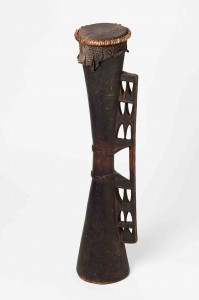 The Asmat people inhabit a remote region of Papua, Indonesia. Thet are known for their traditional and contemporary carvings.

The Asmat live in several hundred villages that are located in tidal and freshwater swamps and lowland rainforests. The challenges of reaching this part of southwestern Papua meant the Asmat had little contact with the outside world until the 1950s.

The American Crosier Fathers and Brothers began collecting Asmart art when they first arrived in Papua 60 years ago. They established the Asmat Museum of Culture and Progress in the Papua city of Agats. Much of the collection then moved to the Crosier Art Museum in Hastings, Neb., and later to Shoreview, Minn. In 2007 more than 1,400 pieces came to St. Thomas, a gift of the American Crosier Fathers and Brothers and the Diocese of Agats.

“One essential goal of the Crosier mission work in Asmat was to create programming that would contribute to teaching skills needed to engage successfully with the international world, a force that was rapidly entering their society,” Risser said. “Promoting carved and woven works by master carvers and weavers emerged as a viable way to engage with the international cash economy as well as affirm respect for the rich Asmat culture.” 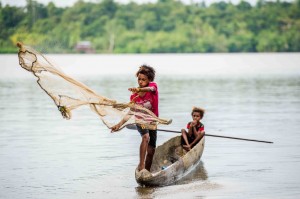 An Asmat boy throwing a net into a river. This is one of seven images of Asmat life taken by Joshua Irwandi, of Indonesia, that are part of the St. Thomas exhibition.

Also included is a video loop featuring interviews with Crosier missionaries who served in Agats. In a 2011 interview about the sacred nature of drums, Father Dave Gallus commented: “It is through the carving that the ancestor is remembered. So the drum has a name, usually. And when you use the drum, the ancestor is also present.”