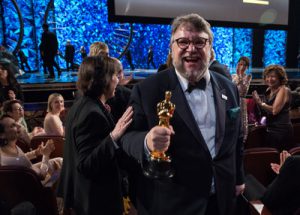 Guillermo del Toro poses with the Oscar for achievement in directing for work on “The Shape of Water” during the live ABC Telecast of The 90th Oscars on Sunday, March 4, 2018 at the Dolby Theatre in Hollywood, Calif. (Photo by Phil McCarten / A.M.P.A.S.)

Who isn’t from a lineage of immigrants in this relatively new continent of ours ‘discovered’ just a few hundred years ago?

Even the indigenous of our land are thought to have had migrated from elsewhere. In his acceptance speech for Best Director at Sunday’s 90th Academy Awards, Mexican film director, writer, and producer of “The Shape of Water” Guillermo del Toro conveys multiple truths. Indeed, multiplicity looks to be the trend forward.

“I am an immigrant,” del Toro declares, these four worlds bold and clear, albeit humbly and thankfully.

Del Toro highlighted another truth by saying that being a part of a diaspora, home can be anywhere. While some may oppose to it, one cannot deny the effects of globalization is a breaking down of barriers, the fusing of cultures, and the forming of the world citizen.

Del Toro is the third Mexican director to win the Best Picture Oscar. He follows two of his countrymen in recent years basking in the Oscar limelight, Alfonso Cuarón for “Gravity” in 2013 and Alejandro González Iñárritu in the subsequent two years for “Birdman” and “The Revenant.”

“… I think that the greatest thing that our art does and our industry does is to erase the lines in the sand,” Del Toro said. “We should continue doing that when the world tells us to make them deeper.”

The making of the Oscar winning feature “The Shape of Water” is itself a testimony of border crossing. Written and helmed by a Mexican director, the film stars a London, England, born Sally Hawkins, supported by a cast of American actors. Original music written by a French film composer, Alexandre Desplat, who won his second Oscar with his water music (his first was “The Grand Budapest Hotel” in 2015). Director of photography is Danish cinematographer Dan Laustsen. The movie nominated for thirteen Academy Awards and winning four is shot and produced in Toronto and Hamilton, Ontario, Canada. Toronto production designer Paul D. Austerberry and his team garners an Oscar for their creative work, bringing del Toro’s fantastic imagination to life.

Del Toro sure knows what it means to erase lines in the sand. 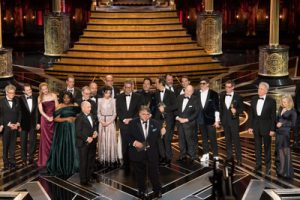 A parallel figure can be found in the world of another art form. The 2017 Nobel Laureate in Literature Kazuo Ishiguro was born in Nagasaki, Japan, in 1954. When he was five, he followed his family to England. At first his parents thought their sojourn would be a short few years, but the family ended up staying there ever since. Immigrants as well. Ishiguro had not returned to visit the country of his birth until thirty years later.

His earliest novels are set in Japan confronting Japanese issues; his later works expand out to other locales and even crossing literary genres. His most well-known novel is probably “The Remains of the Day” which was adapted into film starring Anthony Hopkins and Emma Thompson. It is bona fide a British novel.

Is he a Japanese writer or an English writer? Ishiguro was asked this boundary-setting question after his Nobel win. In his own words on the British Council Literature website: “I am a writer who wishes to write international novels. What is an ‘international’ novel? I believe it to be one, quite simply, that contains a vision of life that is of importance to people of varied backgrounds around the world. It may concern characters who jet across continents, but may just as easily be set firmly in one small locality.” Only by eliminating borders can one reach the universal.

Del Toro had it right when he used the metaphor of lines in the sand. Often borders are not carved in stone but fluid and arbitrary. Surely you can make them deeper. But sand being sand, the lines can be readily washed away as the tides of change come rolling in.