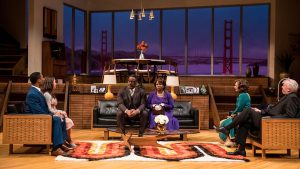 The cast of Guess Who’s Coming to Dinner directed by Timothy Bond. (Photo by Dan Norman)

Playwright Todd Kreidler took the William Rose script for the 1966 racial integration drama, “Guess Who’s Coming To Dinner” for a Guthrie Theater production that is as powerful today as it would become on stage and with the Hollywood film in 1967.

Playing through May 27 at the Guthrie in Minneapolis, “Guess Who’s Coming To Dinner” is a culturally iconic story of Dr. John Prentice (JaBen Early) and Joanna Drayton (Maeve Coleen Moynihan), an interracial couple during the height of the Civil Rights movement in the mid 1960s. Newly engaged, the two are anxious to share the good news with Drayton’s white affluent parents. Her parents are eager to meet her fiance’, who they know is a medical doctor but do not know he is Black. Prentice’s parents are equally as upset.

Drayton is crushed by her naive expectations that her parents would share her excitement and love for Prentice. She is flooded by cognitive dissonance about her parent’s unsupportive reaction. As self-proclaimed, liberal parents she is shocked when they launch into unconscious racist biases and subsequently, a worse case scenario of what it will mean for the mixed race couple to marry.

Matt Drayton, Joanna’s father is visited by racist ideas that he led Hilary to believe were non-existent. When the mixed race couple is hit by ugly racist assumptions and the Drayton parent’s initial disapproval, they decide to leave home that night for Geneva.

Originally, the 1967 film, “Guess Who’s Coming To Dinner” featured: Sidney Poitier, Katharine Hepburn, Spencer Tracy, Katharine Houghton and Stanley Kramer. The highly regarded and controversial story line about interracial marriage between Blacks and Whites gained unprecedented levels of praise given its forward thinking and inclusive messages. Just like the movie, the playwright Kreidler reflects societal and irrational racist norms that we have yet to shed in 2018. The play cleverly captures racism on stage with racially tense conversations that rarely take place in mixed race company.

Kreidler’s rewrite communicates loud and clear messages, which continue to negatively damage our society in 2018. “Guess Who’s Coming To Dinner’s,” impassioned dialogue works to unpack bigoted beliefs that explicitly point out how the poison of racism and racial segregation literally paralyzes autonomy and any hope for racial harmony. The play reveals many painful truths about White privilege, ignorance and racism, which continue to be ignored to this day. Despite fifty years gone by since the original movie, African Americans continue to suffer racism. The rewrite of the play reveals that racism runs deep in the DNA of too many self-proclaimed and unenlightened, “White liberals.”

Given the content, it’s clear that the original 1967 dialogue was ahead of its time. Yet, in 1967, Sidney Poitier convincingly portrayed ways in which love can break through hate and evolve into true love. Recipient of the, Presidential Medal of Freedom in 2009, actor Sidney Poitier played the surprise African American fiancé’ invited to dinner by his White fiancé. Drayton, played by Katherine Hepburn in the movie, raised that bigotry was narrow minded and inhumane. In 2018, the all too familiar racist story line continues to unfold.

In 1967, when Poitier was cast as John Prentice, he had already been recognized for his gifted acting as a recipient of a, Golden Globe for Best Actor in a Motion Pictures (1963) and an, Academy Award –Oscar, for the Best Actor in a Leading Role (1964). Poitier’s rise to fame continued to grow, despite the landscape of hateful politics and open racial hatred.

Now, in 2018, highly skilled actor, JaBen Early is charged with the role of portraying Dr. John Prentice. JaBen Early’s acted with heart and soul. Initially, I was skeptical that performers would struggle to do the original movie and it’s messages of social change justice? Yet, the recreation of the 1967 film at the, Guthrie Theater was magnificent. Added and adapted fresh dialogue merged with the integrity of the 1967 film successfully. Keidler’s creation made me laugh, cry and empathetically transcend into each character’s shoes! In fact, some of the rewritten work that rings true in the millennium made the play more relevant than ever.

Actor JaBen Early is much like Dr. Prentice, in that Early’s education from Morehouse College and Oxford University, matches the intellect of the medical doctor. Early’s unwavering energy from beginning to end is all consuming. Like, Poitier, JaBen Early plays Dr. John Prentice with sophistication, class and heart. It’s impossible not to fall in love with Dr. Prentice’s wisdom, vigor for life and passion for love. He steals the show with his charm, dedication to his work and the respectful way he approaches each character’s resistance on stage.

Another charmer was Regina Marie Williams, who played Tillie the live in help. Initially suspect by Prentice’s charm, Tillie eventually opened up her heart. Quite early, she realized that emotional wounds reignited were paramount in her lack of support for the relationship. Once realized, Regina Marie Williams, acting of Tillie, captivated the hope that people all too often bury due to the every day lived reality of racism. Her interactions with each character were intimate and loving. She revealed a lens of internalized racism that’s used as a coping mechanism to endure a life of being Black in the United States of America. All too often, being a person of color translates into being excluded from a life different from those whom benefit from White privilege.

The full cast: Matt Drayton (played by David Manis), Joanna Drayton (played by Maeve Coleen Moynihan), Mary Prentice (Greta Oglesby), Monsignor Ryan (played by Peter Thomson), John Prentice Senior (played by Derrick Weeden) and Christina Drayton (played by Sally Wingert) performed the updated dialogue like a finely tuned metronome. Where one left off, the other began. The cadence, music and songs interwoven throughout enhanced the emotional experience leaving me with the same welled up tears that Tillie had in her eyes when she exited stage left.

“Guess Who’s Coming To Dinner” raises important questions and implies that listening to loved ones, following your heart and learning from our past mistakes may result in opening our hearts towards racial integration and the possibility of increased racial harmony. JaBen’s acting of Dr. John Prentice breathes hope into an idea that insurmountable love can be contagious. His character reveals that skin color cannot determine the tempo of one’s heartfelt intentions. Instead, love, hope and big leaps of faith must lead the way if we are going to marry interracially and live in harmony.