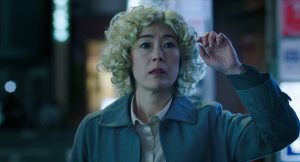 “OH LUCY!” is Japanese director Atsuko Hirayanagi’s feature based on her earlier award winning short film of the same name. Among other accolades, the short was a Cinéfondation selection at Cannes in 2014. Repeating her good repute, Hirayanagi’s full length “Oh Lucy!” garnered the NHK Awards at Sundance and brought her acclaims again at Cannes in 2017.

Coming up this Saturday, March 3, “OH LUCY!” will be in contention for Best First Feature and actor Shinobu Terajima for Best Female Lead at the Film Independent Spirit Awards.

From the outset, the movie is a comedy of culture clashes. Like the 2003 film “Lost in Translation”, while seemingly poking fun at the Japanese society, Hirayanagi’s insights pierce through the cultural veneer to depict urban ennui and reveal deeper longings of the human heart. With this well-intentioned attempt, “OH LUCY!” is a dramedy beyond cultural borders.

Setsuko (Shinobu Terajima) is a middle-aged office worker in Tokyo. She waits for her train at the subway station along with the masses, dulled by the daily routine of work and numbed to her own feelings and needs. Her life is changed one day as she receives a call from her niece Mika (Shioli Kutsuna) asking her for a favor.

Mika’s request is that Setsuko replaces her as a student in an English class as she has to quit right away but the school refuses to refund her the advanced fees she has paid for the full year. Setsuko will pay Mika the fees and take her place, as she urgently needs the money. Mika’s bubbly and sweet imploring is too hard for Aunt Setsuko to refuse: “I’ll change your diapers when you are really, really old.”. The fees, by the way, is 600,000 yen, that’s about 5,600 USD.

Thanks to the unorthodox English class, Setsuko sees her alter ego unleashed and come alive. 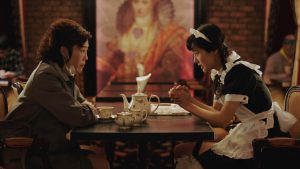 Teacher John, St. Paul, MN, born actor Josh Hartnett, gives her a blonde wig to wear and the name Lucy. With a new persona, Lucy slowly eases into an unhindered atmosphere to learn American English, which requires the learner to be “lazy and relaxed”.

One day her class is cancelled, for John has suddenly quit and has gone back to America. Coincidentally, Mika also disappears. Later, she lets Lucy in on her great escape with John to California. Lucy’s life turns another new page as she decides to go chase after them, or rather, John.

She knows exactly where to track him down from the postcard Mika sent her from a motel in L.A. Mika’s mom insists on coming along. Two Japanese middle-aged women thus begin their trip to America with little English. In the expanse and open space of California, Lucy unfurls further.

John also appears to have another persona in his home country. Director Hirayanagi leads Lucy on a personal escapade, stripping her of inhibitions and ultimately takes her to yet another chapter of her life. Whether it’s Tokyo or LA, the basic human need for love and connection is not much different.

The humor is subtle and deadpan, and the cultural comedy may just function as a contextual setting. It is the characterization of Lucy that is what Hirayanagi aims to depict. The switch into fast-forwardness of Lucy with her bold sexual advances on John may not be convincing if she’s Setsuko. But she’s now Lucy in California, oh, things can surely be different. 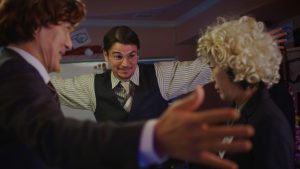 Hirayanagi is clever to not let things end right there in California. In the last scene, on a subway platform as in the beginning of the film, Setsuko finally embraces a worthy find.

“OH LUCY!” opens at the Landmark Lagoon Cinema in Minneapolis on Friday, March 9.