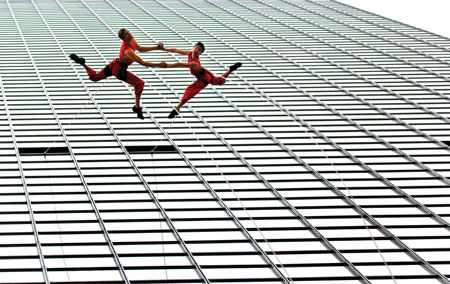 Project Bandaloop will perform outside for free during the Festival, suspended on the Lawson commons Building. (Ordway photo)

Ordway Center for the Performing Arts is gearing up for its 11th Flint Hills International Children’s Festival. Minnesota’s signature arts festival for children and families features performing artists from all across the state, region and world. Festival dates are May 31-June 5, 2011. Nearly 500,000 people have enjoyed the Festival since it began in 2000.

The Festival takes place in two parts: School Days (May 31-June 3) and Family Weekend (June 4-5). More than 14,000 children from schools across Minnesota and Western Wisconsin participate in School Days by attending performances, participating in interactive activities and engaging in artist residencies.

One of the favorite highlights of the Festival is the Discovery Garden, an urban garden created by artists Mark Granlund and Angela Koebler from Saint Paul’s Parks and Recreation Department. The garden, which will be installed in Hamm Plaza, honors the many meanings of exploration and innovation. Artist residencies with students from South Education Center and the College of Visual Arts will be a part of this year’s garden. The Discovery Garden is supported by the Huss Foundation.

“The Flint Hills International Children’s Festival is one of the top children’s festivals in the world,” said Jake Reint, director of public affairs at Flint Hills Resources. “The festival is an opportunity for Flint Hills to be a part of something extraordinary, something unique to Minnesota, and something that inspires young people to be creative and dream big.”

Throughout the Festival, participants will enjoy ticketed international performances inside the Ordway and numerous free, outdoor performances on both the Flint Hills World Stage and Target Alley Stage. Thanks to the ongoing support from Target ® Corporation, all tickets to indoor shows during the Family Weekend cost only $5 each. General admission tickets can be purchased ahead of time through the Ordway ticket office and online at ordway.org.

The headlining international performance for the 2011 Festival, “Corbian the Dinosaur,” is presented by CORBiAN Visual Arts & Dance. “Corbian the Dinosaur” is a truly unique theater experience featuring larger-than-life, glow-in-the dark characters that light up the stage.

Created by a magical scientist, Corbian is much more than a pet. As Corbian’s animal instincts take over, the scientist creates a heart for him and encourages him to experience life beyond the scientist’s workshop. Join Corbian as he meets a gangly ostrich, a beautiful fish and a menacing red dinosaur that help him learn the value of compassion, friendship and love.

Also on the lineup for indoor performances are Puppet State Theatre Company’s multi award-winning “The Man Who Planted Trees,” the energetically rich Oyu Oro Afro-Cuban Dance Ensemble, and Canadian singing duo, Dala. Project Bandaloop will perform outside for free during the Festival, suspended on the Lawson Commons Building.

The magical, comical and multi-sensory performance by Puppet State Theatre Company of Scotland is an adaptation of Jean Giono’s ecological fable and tells the inspiring story of a French shepherd and his dog. Together they set out to restore a ruined ecosystem by planting a forest, acorn by acorn, tree by tree. An unforgettable story, “The Man Who Planted Trees” reminds us of the effect that one person can have on the world.

Oyu Oro fills the stage with their energetic fusion of dance, rhythm and song that pay tribute to Afro-Cuban culture. Oyu Oro explores traditional dance forms that derive from the cultures of West Africa such as the Yoruba and Congo; the rich Haitian influences that remain in Cuba of vodu and Haitian bembe; along with popular dances of Cuban heritage, including rumba and conga.

Since 1991, Project Bandaloop has been amazing audiences worldwide and creating dynamic dances that reframe how people perceive their environment and the art form of dance. Performing in natural and urban settings, the company uses theaters, buildings, towers, bridges, cliffs and skyscrapers as its dance floor. Suspending from the outside of the Lawson Building on St. Peter Street, Project Bandaloop will bring its unique art form to audiences in downtown Saint Paul. Each performance lasts 20 minutes and is viewable from Rice Park, Landmark Plaza and Hamm Plaza.

Outdoor performances, scheduled from 10 a.m. to 5 p.m. on both Saturday and Sunday, include notable regional performing groups such as Circus Juventas, Katha Dance Theatre, Los Alegres Bailadores, El Arco Iris and more. New to the outdoor lineup this year are Rene Thompson and Dancers, who will perform Latin social dancing; and Motion Crew, a breakdancing group.

In addition to performances, the Festival features visual art projects highlighting Minnesota’s finest artistic talents and collaborations. The Festival works diligently to bring together artists and students to engage creative minds. The art that emerges from the ARTwalk, commissions, public art residencies, parade residencies and other student- and young artist-driven public artworks will be displayed throughout the Festival grounds, such as the ongoing collection of student artwork in the K-12 sculpture garden. On Saturday at 1 p.m., the ever-popular ARTmoves Parade invites participants of all ages to take part in a vibrant parade of moving art created in residencies at eight Metro area community centers.

To learn more about all Festival art projects, visit www.ordway.org/festival/projects.

In order to make the Festival accessible to everyone, Metro Transit is offering free rides to the Festival on all Metro Transit buses and light-rail trains with a Go Greener Pass. In addition, the RiverCentre Ramp in downtown Saint Paul is offering discounted parking of $5 with the use of a printed coupon. Both the pass and coupon are available for download at www.ordway.org/festival.