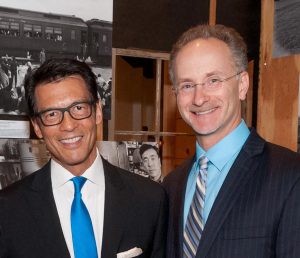 MacIntyre, a filmmaker, and Ono, a journalist, are being recognized for their roles in sustaining the legacy of Heart Mountain. MacIntyre and Ono are recognized for continued commitment to telling the incarceration story through interviews, presentations and films. Their collaborative work includes the Emmy Award-winning documentary “Witness: The Legacy of Heart Mountain.”

“David and Jeff have done extraordinary work with our community to tell the story of what happened to Japanese Americans 76 years ago, not only at Heart Mountain but at other incarceration sites across the country,” said Shirley Ann Higuchi, chair of the Heart Mountain Wyoming Foundation. “Their unique perspective and capacity to engage Americans through filmmaking and journalism is inspiring, creating and continuing critical dialogue about social justice issues.”

Ono is an award-winning anchor for ABC who has witnessed history worldwide, covering a variety of current events and chronicling the brave acts of a Nisei soldier across Europe during the war. MacIntyre’s company, Content Media, has produced multiple films highlighting the human experience of war, including Japanese American incarceration, the Holocaust, and the Vietnam War.

The LaDonna Zall Compassionate Witness Award honors those who have helped the Japanese American community even though they are not directly impacted by oppression. Created in 2017, the award first honored LaDonna Zall herself, who continues to be an acting curator, volunteer, and supporter of the Heart Mountain Wyoming Foundation, aiding in its establishment and growth over the past two decades. Zall was also instrumental in the development of the former confinement site into a National Historic Landmark and the creation of the onsite museum, the Heart Mountain Interpretive Center.

The award will be presented on the last weekend of July at this year’s Heart Mountain Pilgrimage to the dual recipients. The 2018 Pilgrimage theme focuses on art in any form, created in the confinement sites as well as about the Japanese American incarceration experience. MacIntyre will present an educational session at the Pilgrimage, while also reprising his annual role of mentoring as he leads the Digital Storytelling Workshop which will precede the weekend of events.