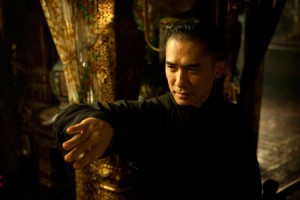 “The Grandmaster” (The Weinstein Company, Rated PG-13) spans the tumultuous Republican era that followed the fall of China’s last dynasty, a time of chaos, division and war that was also the golden age of Chinese martial arts. A star studded cast includes performances by some of the greatest stars of contemporary Asian cinema, including Tony Leung and Ziyi Zhang.

Filmed in a range of stunning locations that include the snow-swept landscapes of Northeast China and the subtropical South, this highly-anticipated film took six years to plan and three years of production.

Tony Leung as Ip Man, and Ziyi Zhang as Gong Er, a master of the dance-like, flowing and circular Bagua style of kung fu.

Chang Chen portrays “The Razor,” a master of the explosive Baji style of kung fu, for which he won first place in a national Baji competition in China. He has been making films since the age of 15 and is best known as “Dark Cloud”, the lover of Ziyi Zhang’s character in “Crouching Tiger, Hidden Dragon.” 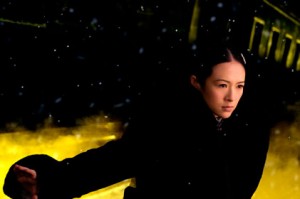 Ziyi Zhang as as Gong Er, the daughter of Grandmaster Gong Baosen, in “The Grandmaster.”

Ip Man was born in Foshan, in the south of China, to a wealthy family. His wife Zhang Yongcheng (Song Hye Kyo) is the descendant of Manchu nobility. By age 40 Ip Man has inherited great wealth and land but in 1936, China is experiencing political turbulence and the threat of division and the Imperial Japanese Army invaded the northeastern provinces collectively known as Manchuria.

Grandmaster Gong Baosen (Wang Qingxiang), whose home is in Japanese-occupied Manchura, is the leader of the martial arts world of Northern China, and arrives in Foshan to initiate a challenge for masters to contest masters to take his place. His daughter Gong Er (Ziyi Zhang), is the sole inheritor of his lethal Bagua-style ’64 Hands’ technique, and arrives in Foshan to witness her father step down and encounters Ip Man.

The ongoing Japanese occupation of the Northeast sets the stage for a betrayal that will shake Master Gong’s world. It will also cause Gong Er to make a decision that will change the course of her life.

Gong Er and Ip Man meet again in Hong Kong in the 1950s; a new world populated by old alliances, lasting grievances, and fragments of past lives and desires. Despite living through terrible times Ip Man will not be defeated by hardship and opens a school for Wing Chun in Hong Kong with devoted disciples including Bruce Lee.

Wing Chun spreads throughout the world and remains popular to this day.

“The Grandmaster” is being called by some the greatest martial arts movie. Although that is a subjective title, Wong Kar Wai presents a new chapter in the martial arts genre.

Chang Chen portrays “The Razor”, a master of the Baji style kung fu in “The Grandmaster.”

With years of research before production and had numerous martial arts trainers on set ensured that the film portrayed both the Chinese martial arts and the world of the martial artists with unprecedented authenticity to include action choreographer Yuen Wo Ping (The Matrix, Kill Bill, Crouching Tiger Hidden Dragon).

It all started in 1996 when Wong Kar Wai was in Argentina filming “Happy Together” and noticed a magazine with a picture of Bruce Lee on the cover. He was struck by the fact that two decades after his death the legendary martial arts fighter and actor was still a global icon.

“I grew up watching Bruce Lee’s films,” says Wong. “I loved them.”

Wong wanted to make a film about Bruce Lee. The more he learned about Lee’s teacher, Ip Man, the more fascinated he became with the grand master.

Ip Man was one of many kung fu masters from the mainland who ended up in Hong Kong in the 1950s. The resulting rival martial arts schools rivalries were intense, and mutual challenges were constant and fierce.

“The Grandmaster” tells the story of one master and one street. This one street embodies the story of an entire era — the martial world of the Republican Era (1911-49), the golden age of Chinese kung fu, together with its rivalries, tragedies and esoteric mysteries.

Many of Hong Kong’s kung fu masters came from the north, in particular the Japanese-occupied Northeast, before upheavals sent them into permanent exile. Many of these masters had been involved in Wushu exchanges with the Southern masters. 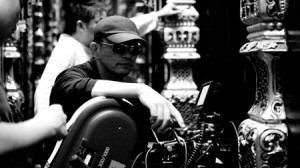 Filmmaker Wong Kar Wai on the set of filming “The Grandmaster,” a six year project that will see U.S. release next weekend. (Photos courtesy of The Weinstein Company)

On the road, Wong interviewed martial arts masters who shared their tales of the martial arts world. This precious cultural treasure is in danger of being forgotten and Wong was determined to showcase this heritage through stories of the schools of Wing Chun, Bagua, Xingyi and Baji.

Ziyi Zhang, Tony Leung, Chang Chen and Zhang Jin were up to the challenge.

Ziyi Zhang, with her background in dance and exquisite physical grace, would represent Bagua. Tony Leung would play Wing Chun grandmaster Ip Man. Zhang Jin would play Ma San, a master of Xingyi and Chang Chen as The Razor would take on the explosive form of Baji.

In a production notes interview conducted by Linda Jaivin in Bangkok, Tony Leung said he studied the martial arts of the northern masters for several months leading up to the production. In contrast, the director didn’t give him much to read about his character, Ip Man. “He wanted me to read more about Bruce Lee,” Leung stated.

The character was to be a kind of blend of Ip Man and Bruce Lee, and since Leung has worked with Wong Kar Wai many times over the past decade, he said there was no reason not to trust his instincts.

“We have a strong mutual trust,” he said. “The movie doesn’t aim to be a documentary; we wanted to create a kind of ideal, ‘perfect’ Ip Man.”

Leung’s impression of Ip Man is that he was gentle, civilized, a deep-thinker and a gentleman. The son of a wealthy family, he had everything he could want by age 40, but then loses everything with WWII, and had to ask for a blanket when he arrived in Hong Kong. In the end, it was Ip Man who was still standing.

When he fought, Ip Man became fierce and almost animalistic, and Leung said this fascinated him and aided in fashioning an ideal vision of Ip Man as a positive character who’s approach to life was informed and inspired by kung fu.

“I thought this was a fascinating blend,” Leung said.

Bruce Lee was the opposite, Leung said. He studied philosophy and Daoism. His life informed and inspired his kung fu.

“In fact, Ip Man and Bruce Lee took different routes to the same destination,” Leung said. “In his writings, Bruce Lee often spoke of Ip Man, calling him one of the greats of the kung fu world. Ip Man inspired him to understand that kung fu wasn’t just physical training or a means of self-defense but a form of mental cultivation and a way of life.”

Leung said he could only come to understand these two people and their approach to life by studying kung fu himself. The training over four years helped to achieve authenticity in the action sequences but at the same time, he said it helped to develop his character in a way just reading couldn’t do. 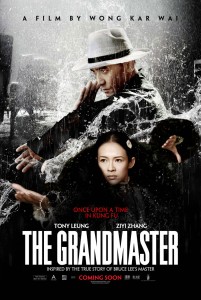 “So I could see why the director asked me to undertake such a long and rigorous process of physical training, during which I broke my arm twice,” Leung said. (He started training too soon after a hairline fracture and re-injured his arm).

Under the tutelage of the Baji master Wang Shiquan, Chang Chen became so talented at Baji that he took first place in a national Baji competition in 2012 – an accomplishment that become a media sensation.

Shigeru Umebayashi composed his ninth original film score for “The Grandmaster” in collaboration with Nathaniel Mechaly.

William Chang Suk Ping and Alfred Yau Wai Ming designed the production. It took Chang two years to search out and collect the beads, ribbons, lace, and materials for the costumes alone he collected a library of photographic books of the era for visual references.

Among the sets they built in southern Kaiping, a town near Foshan in Guangdong Province where the production was based, were a full-scale replica of a train station in Japanese-occupied Manchuria, the magnificent bordello known as the Gold Pavilion, as well as the boarding houses and kung fu schools of 1950s Hong Kong.

After eight years of preparation, principle photography under the direction of Philippe Le Sourd, and action photography by Yuen Wo Ping, began in November 2009 in Kaiping. From January 2010 to May 2010 the shooting moved to Northeast China, where they shot under blisteringly cold conditions that took cast, crew and equipment to the very limits of endurance.

Shooting resumed in September 2010 and continued through November 2012 in Kaiping; post-production took place in Bangkok in late 2012-13 at Oriental Post.