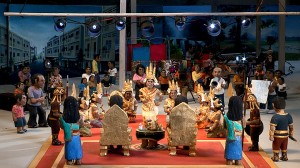 Mixing together animated clay figures, archival footage, and his own narration, Phnom Penh–born director Rithy Panh forms a deeply haunting and personal account of the Khmer Rouge in an effort to uncover untold stories of the many who suffered under Pol Pot’s rule.

“The Missing Picture” won the Un Certain Regard Award at the 2013 Cannes Film Festival and is nominated for this year’s Academy Award for Best Foreign Language Film.

Rithy Panh moved to Paris after the Khmer Rouge forced him and his family from his home and into a labor camp in 1975. The Missing Picture explores his quest for a “photograph” between the years 1975 and 1979 by the Khmer Rouge when they ruled over Cambodia.

The First Look series is made possible by generous support from Elizabeth Redleaf, and Media Partner 89.3 The Current.