A Film Review by Diana Cheng 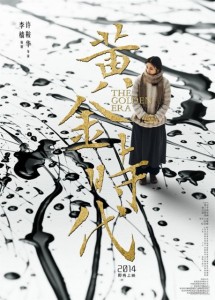 CALGARY (Oct. 20, 2014) — Hong Kong director Ann Hui’s “The Golden Era” premiered at the Venice Film Festival this September. Three years earlier, Hui was basking in the limelight there receiving awards for her work “A Simple Life” (2011).

“The Golden Era” is her newest feature. One week after its premiere, it was screened at the Toronto International Film Festival (TIFF14). It was included in the Masters category which according to TIFF, represents ‘the latest works from the world’s most influential art-house filmmakers’, placing Hui in the league of French auteur Jean Luc Godard in the Festival program.

The film is based on the screenplay by Qiang Li, who had collaborated with Hui before in “The Postmodern Life of my Aunt” (2006). Their newest work “The Golden Era” is a biopic of the Chinese female writer Xiao Hong (Tang Wei), one of four prominent female literary figures in China at the turn of the twentieth century.

Born 1911 in Manchuria, north-east China, Xiao’s life was as tumultuous as the times. The Japanese occupation of Manchuria was soon followed by a full-blown invasion of China. Chiang Kaishek was then leading the precarious Republic established after the collapse of the Qing Dynasty. With the onslaught of the imperial Japanese military, Chiang had to temporarily join hands with Mao Zedong’s uprising Communists to resist a common enemy during the 1930’s. 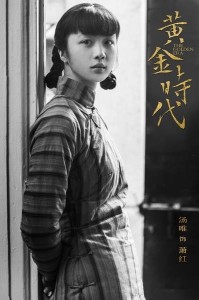 The 179 minute film is epic in scope, starting with Xiao’s childhood and her endearing relation with her grandfather, followed by her later escape from home and a marriage arranged by her abusive father when she was 20. For the large part of the film we see Xiao struggling in poverty, wandering and rootless, seeking shelter from writer friends and literary figures, the most well known being the great Lu Xun (Zhiwen Wang). She spent some years in a fraught love relation with fellow writer Xiao Jun (Feng Shao Feng).

The two later parted in the chaos of Japanese invasion when Jun was determined to join the resistance organized by the Communists. Xiao retreated to a less dangerous area and subsequently married novelist Duanmu (Yawen Zhu). Her intention was to “write in peace” and to live “as an ordinary husband and wife”. Unfortunately, peace was not to be had.

To escape from Japanese invasion, the couple fled to Hong Kong in 1940. Xiao’s misfortune only deepened as she contracted tuberculosis a year later. After several moves from different hospitals to escape Japanese bombing, Xiao succumbed to her illness and died at the young age of 31 in 1942.

Li’s innovative screenplay gathers accounts and point of view from different people involved in Xiao’s life as eye-witnesses, interestingly starting with herself. Breaking the fourth wall, the narrators speak directly into the camera and offer their own perspective of Xiao Hong as they know her. Excerpts from her own letters and writings are also included. 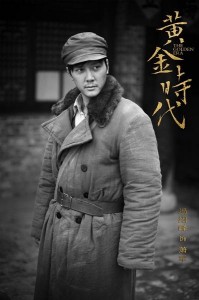 What we have then are fragments of inconsistent accounts. Director Hui’s treatment of the biopic is both linear as it slowly moves forward in years but also discursive as we see Xiao from various points of view. Such an unconventional way of storytelling is a fresh attempt and overall, works quite well.

Other commendable elements are the cinematography, costumes and set design. Hui’s production is aesthetically stylish and nostalgic. For Chinese living overseas and our next generations, we have films like these to thank in exposing us to episodes of modern Chinese history.

Two productions set in similar historical backdrop come to mind. The most recent one is last year’s Oscar nominated film “The Grandmaster” (2013) from director Wong Kar Wai; the other is Ang Lee’s “Lust Caution” (2007), which is a film adaptation of a short story by another of the four prominent early twentieth century female literary figures, Eileen Chang.

Fast forward to “The Golden Era”, Tang looks just as young, appearing equally innocent. She has not exuded the charisma needed to portray an independent thinking female writer who is brave enough to break away from tradition and her authoritarian father, and strong enough to take an ’apolitical’ stance amidst her leftist literary friends like Xiao Jun and Ding Lin (Lei Hao). 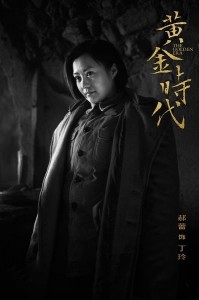 We see Wei smoke a lot on screen, but that certainly is insufficient to convey the inner depth or maturity of a character who devotes her life to the calling of a writer amidst war and political turbulence, fighting against the tide to offer a literary voice amidst the ferocious torrents of national devastation.

Further, the film could benefit from tighter editing especially in the last section, where we see Xiao being evacuated from hospital to hospital only to succumb to her illness, a parallel reflection of the fate of Hong Kong falling to Japanese hands on Christmas Day, 1941.  Without a dramatic story arc and moving along in a slow pace over three hours, the production has difficulty offering entertainment value despite capturing so well the historical details and the literary scenes of the time.

Yet the subject matter is notable. For films coming out of China or as this one, a collaboration of China and Hong Kong film industry, there appears a need for the content to be more diverse, covering thematic matters other than the cultural revolution or historical martial arts epics. Producing a biopic of a female literary figure during the Republic period is a bold and laudable choice.

Find out more about the film at facebook.com/chinalionfilm.