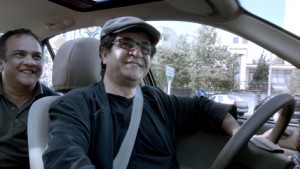 CALGARY (Oct. 28, 2015) — A light-hearted piece of recording, “Panahi’s Taxi” (Farsi with English subtitles) is a clever and whimsical view of humanity under constraints, a subtle satire that is full of heart and soul. The film opens Friday, Oct. 30, 2015 with an exclusive Minnesota engagement at Landmark’s Edina Cinema.

On March 1, 2010, internationally acclaimed Iranian director Jafar Panahi, a voice for democracy in his country, was arrested and later charged with “crimes against the country’s national security and propaganda against the Islamic Republic.”

On Dec. 20, 2010, Panahi was convicted and given a 20-year ban on filmmaking, writing screenplays, giving interviews and leaving the country. Breaking any of these restrictions could lead to a six-year jail term for the auteur.

Since then, Panahi had creatively resorted to another mode of expression. “This Is Not A Film” was made with his friend, documentary filmmaker Mojtaba Mirtahmasb, holding a camera to record his daily activities and the ‘telling’ of a banned screenplay within the confines of his house. As the title states, this is not a film, just an eyepiece on a restrained artist, at times somber, stoic, and at times frustrated with the lack of freedom. “This Is Not A Film” was smuggled out and premiered at Cannes in 2012, an Official Selection in Special Screening. A year later, his “Closed Curtain” premiered in Berlin and won the Silver Bear for Best Script, another ‘non-film’ bravely made in defiance.

Now in 2015, Panahi brings us “Taxi”. The director drives a yellow cab and picks up his fares on the streets of Tehran, with a camera mounted on the dashboard. Viewers get to see a slice of Tehran’s populace as they talk to each other and with the driver while sharing rides in his vehicle. Panahi is in a much smaller confine, a taxi, but with the camera on the people he picks up, he expands his world. Again, this is not a film, technically just a ‘video selfie’, but another creative way to bring out the humanity of his fellow citizens under an authoritarian regime. 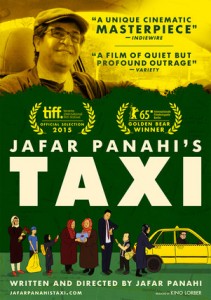 Here are some of his passengers. A man arguing with a woman about crime and punishment according to Sharia Law. A bloodied motorcyclist helped by his wife onto the taxi as she screams for a speedy trip to the hospital. The injured husband asks for a cell phone to record his last will and testament to pass ownership of his house to his wife, as women do not have the right to inherit properties. We also see two women carrying a bowl of goldfish to act upon a belief they hold or their lives will be at stake.

For most of his encounters, Panahi looks bemused and relaxed. A fusion of spontaneity and scripted conversations, facts and fiction seem to intermingle, and there are cuts and edits in the 82-minute film. Regardless, this defiant act of video selfie-making is an alternative mode of expression allowing us a glimpse into the world of Tehran and its citizens, and conveying a vivid representation of what the filmmaker in confinement, however metaphorical in a taxi, whishes to share with the outside world.

Two passengers are particularly of note. One is a DVD bootlegger who recognizes Panahi, as he had brought him a Woody Allen movie before. Foreign films are banned substance in the country. Ironically, we are now seeing the banned director driving his fare to deliver banned films to a customer. As we hear the two chat, we see the power of films to connect.

Another person the director needs to go pick up is his own niece waiting for him after school. She is one spirited, vocal and articulate young lady who can match wits with her filmmaker uncle. Herein lies the satiric essence of “Panahi’s Taxi”. The youngster needs to make a short film for a class project and she reads out to him the teacher’s instructions, rules she must abide by. Her film must be first, distributable, in other words, allowed to be shown. Among the many conditions from her class notes, she is to avoid ‘sordid realism.’

Panahi’s Taxi premiered at the Berlin International Film Festival early this year and won the FIPRESCI Prize and the Golden Berlin Bear. Going on stage to accept the award on Panahi’s behalf was this very niece of his, appearing exhilarated and moved.