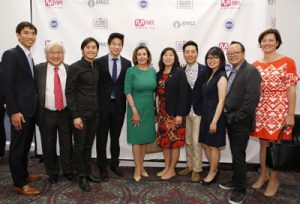 The panel discussion and reception took place at the Cannon House and Rayburn House office buildings in Washington, DC, in commemoration of Asian Pacific American Heritage Month celebrated in the each May in the United States.

“It’s so important to make sure that we have diversity in the media, and CAPAC has been at the forefront of advocating for stronger media diversity and inclusion across the board. We are especially committed to ensuring that we see more accurate portrayals of Asian Americans and Pacific Islanders (AAPI) in mainstream media so that we open up doors for AAPI actors and media to tell our stories,” said Judy Chu.

Added Nancy Pelosi: “I’m so honored to be here with CAPAC to celebrate Asian Pacific American Heritage Month. The Asian Pacific community in our country has really been such a source of entrepreneurial reinvigoration. When you think of what America is about, we’re about community, we’re about family and when you think about the attributes that make us American, you think optimism, courage and determination to make the future better for our families. You don’t have to look farther than this community to see a commitment to family, to community, to hard work, all of which makes America’s future brighter.”

Moderated by author, research executive and Wall Street Journal columnist Jeff Yang (SVP, the Futures Company), the conversation looked at today’s entertainment and media landscape, and where Asian Americans fit into it; how it changed throughout the years and what stereotypes still exist; opportunities for APA performers; the impact of social media and the flattening of the world that has led to a globalization of media; and what the future holds.

“What I’d like to see from Asian American talent for the rest of this year, and the next five years, is that everyone create their own content – whether it’s on YouTube, film and TV in general, or even things like podcasts and editorials like what Traci Lee is doing. Instead of complaining, take action and continue creating; from my end that is the most helpful and will make the biggest change,” remarked Justin Chon. “The panel was really inspiring, and I think this is something very important that we should constantly do … not stay silent especially as this month [APAHM] comes to an end. It’s something I want to stay conscious about for the rest of the year as I continue on my endeavors.”

“This event is part of Mnet America’s commitment to supporting Asian media and Asian American talent in Washington, as well as to Hollywood and the mainstream cable, television and digital media industries,” said Sang H. Cho. “There has never been more interest in Asian entertainment and culture, and the actors and influencers in attendance today are a microcosm of the great work being done by and for the APA community.”

Mnet America, the leading national, English-language lifestyle television network in the U.S. for fans of Asian pop culture, airs many of the best-in-breed entertainment programming including original shows such as Danny from LA, Korean dramas, music videos, anime and movies. The network is the premier television destination for K-pop music, providing fans with a slew of documentaries, music videos and concert series to feast their eyes and entertainment taste buds on. Since 2012, Mnet America has taken its engagement with Asian pop culture fans in the U.S. to the next level, as producer and broadcaster of the largest and most-popular Korean entertainment fan convention, KCON, which attracted over 75,000 fans in L.A. & NYC in 2015. This year’s KCON USA presented by Toyota takes place June 24-25 at the Prudential Center and July 29-31 at the Staples Center and Los Angeles Convention Center.

Mnet America (www.mnetamerica.com) is the leading Asian entertainment network in the U.S. With interest in Asian pop culture on the rise, Mnet America is the premier destination for fans to get an in-depth look at the latest music, film, drama, fashion and lifestyle trends. Through a unique mix of original productions along with programming from Asia, Mnet America has something for everyone – from existing hard core fans to new audiences discovering Asian entertainment for the first time. Mnet America can be found on TV and online, providing English-language programming to viewers via Comcast, Time Warner Cable, Verizon FiOS, Charter and Cox, as well as at mnetamerica.com. It also produces KCON, the largest North American fan convention for ‘All Things Hallyu,’ along with its parent company, CJ E&M.