Ethan C. Dizon, 11, was born in Los Angeles, Calif. He started acting in national commercials when he was 18-months old, and continued on with national spots for Target, Mercedes Benz and The American Egg Board.

Dizon earned his first acting role at age 6, as a recurring character in the CBS comedy series, “How I Met Your Mother.” His other television credits include guest spots on “Grey’s Anatomy” (ABC) and “Til Death” (FOX). His short film, “Paulie”, just screened at the Los Angeles County Museum as part of a festival.

Dizon said he brings his characters to life by imagining them both on and off set. When the director tells him to perform an action, they are really telling his character to be himself, he said.

This past January, Dizon made his Sundance screen debut in the motion picture, “The Inevitable Defeat of Mister and Pete,” which is produced by Alicia Keyes, Jennifer Hudson and George Tillman, Jr., who also directed.

Dizon said he was very pleased to be invited to Sundance and was thankful to work on this film.

“Everyone in the cast and crew were great,” Dizon said. “My role in the movie was exciting and challenging because the character of Pete lives with a lot of hardship, but he’s still a normal kid who wants to play and be loved.”

Later this year, he will also appear in Jason Bateman’s directorial feature, “Bad Words” and CBS Films’, “Get A Job.” 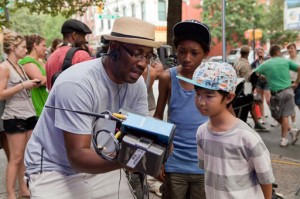 Ethan Dizon with director George Tillman, Jr. The two worked together in the 2013 film “The Inevitable Defeat of Mister and Pete,” which was produced by Alicia Keyes.

“I’m a lucky kid,” said Dizon. “I work with lots of really great people and I’m thankful for all the opportunities I’ve been given to tell really cool stories with my acting. I always want to learn more and keep working hard to be a better actor, writer and future director.”

His great-grandfather is Lim Poon Lee, a World War II veteran who became the highest federally appointed Chinese American in 1966, when he was appointed U.S. Postmaster of San Francisco in 1966 by President Lyndon Johnson. He passed away in 2002.

Congresswoman Nancy Pelosi introduce Legislation to name the Chinatown Post Office in San Francisco after Lee, who is credited with establishing the office in 1977. The bill was signed by President Barack Obama on Dec. 1, 2009.

Dizon is also the grand-nephew of Chinese cinema starlet, Chow Kwun-Ling, who is his mother’s grand aunt. She was raised in California, before moving to Hong Kong to make 183 films between 1946 and 1964.

“My family and mentors are very supportive and help me perform tough scenes,” Dizon said. “My mom (Corrine) is also an actor and has passed her wisdom onto me. My dad also does a great job of coaching me and helping me understand the scripts I read.

In school, I’m just a normal kid and no one treats me any differently. I hang out with the same group of friends I’ve had since kindergarten.”

As for advice to other kids that want to get into acting, Dizon said it is good to be nice to family and friends and not to think highly of yourself compared to others.

“You are still just a kid,” Dizon said. “Don’t give up when things are tough, and don’t let others discourage you.”

Dizon is currently busy testing for movies and pilots. He was also on set for about a week shooting a national commercial.