LOS ANGELES — Ang Lee won for Achievement in Directing on Sunday night at the 85th Academy Awards, for his film “Life of Pi”, which took home four Oscar’s out of 11 nominations. 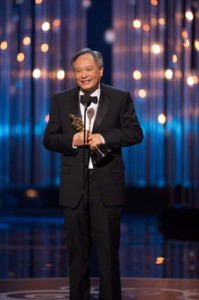 It was perhaps an unexpected victory in a field that included Steven Spielberg’s epic “Lincoln.” The field was rounded out with Michael Haneke, director of “Amour”, Benh Zeitlin for “Beasts of the Southern Wild” and David O. Russell for “Silver Linings Playbook”

This is Ang Lee’s second Academy Award for Best Director for the Taiwanese film director, screenwriter and producer. He won the Oscar for directing Brokeback Mountain in 2005, before winning on Sunday for Life of Pi. His film Crouching Tiger, Hidden Dragon won the Academy Award Best Foreign Language Film in 2001.

In his on-stage acceptance speech, Ang lee said there were 3,000 people to thank that worked with him on Life of Pi. The 3D adventure-drama us based on Canadian author Yann Martel’s 2001 book of the same name and adapted to the screen by David Magee. He also thanked the Indian actors, Surai Sharma, Irrfan Khan, Tabu, Adil Hussain, Ayush Tandon, French movie star Gérard Depardieu and English actor Rafe Spall.

The story centers on a 16-year-old boy name Piscine “Pi” Patel, who loses his family in a shipwreck, only to wind up stranded in the Pacific Ocean on a liferaft with a Bengal Tiger named Richard Parker.

“I really want to thank you for believing in this story and share this incredible journey with me,” Lee said.

Ang thanked Martel for the inspirational book, and the people at Fox 2000 Pictures, the producers and cast, calling them the “golden statue in his heart”, including Suraj, who he called “a miracle” in portraying young Pi. He also thanked his Indian and Canadian crews, attorneys and agents. Finally, Ang thanked his family in Taiwan and his wife, Jane Lin, of 30 years this summer.

Backstage, Ang said it pleased him to think that the people of Taiwan were jumping with excitement about the award. Ninety percent of the filming was completed in Tai Chong, a city he described with passionate people who provided physical help, the locations and also financial help, he said.

“This is really an international film,” Ang said. “I’m glad that Taiwan get to contribute this much to the film, therefore, present the movie to the whole world. I just feel like this movie really belong to the world.”

It was an appropriate conclusion to the Chinese New Year, after two weeks of celebration

“I’m very happy that I get this and I share the excitement with all the Taiwanese people and the Chinese and Asian people everywhere,” he said. 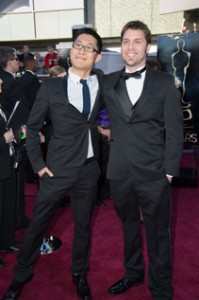 Minkyu Lee, Oscar-nominee for Animated Short, and guest arrive at the Dolby Theatre for the 85th Academy Awards in Hollywood on Sunday. (PHOTOG/©A.M.P.A.S.)

As an outsider in Hollywood, Ang said he has to be more diligent but that sometimes these disadvantages can be an advantage. Coming from another culture makes the process of adapting to English an enriching experience and creates a sense of world culture that he said starts in Hollywood.

“You know, it’s like one culture in my left side of the brain, the other is the right,” he said. “You can use both sides of your head. It’s an advantage. So I encourage a lot more Asian filmmakers to give it a try.”

Accepting the award Danna said he shared the award with director Ang Lee, who he called the film’s visionary captain.

“You’ve guided a truly global cast and crew in the telling of this wondrous, beautiful story that transcends culture and race and religion,” Danna said. “In the same spirit, musicians from around the globe came together to breathe life into this music and I hold this award on their behalf.” 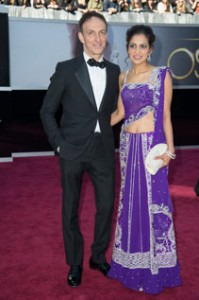 “Life of Pi” composer Mychael Danna, left, Oscar-winner for Best Original Score, and nominee for Best Original Song, arrives at the Dolby Theatre in Hollywood Sunday with his spouse Aparna Danna to attend the 85th Academy Awards. (Photo by [PHOTOG]/©A.M.P.A.S.)

Danna, who is a Canadian composer from Burlington, Ontario, thanked his wife Aparna and two sons, Arjun and Keshav.

Danna was also nominated in the Best Original Song category for “Pi’s Lullaby” from “Life of Pi”. He composed the music and Bombay Jayashri wrote the lyrics. The Oscar in that category went to composer Adele Adkins and lyricist Paul Epworth for “Skyfall” from the film “Skyfall”

Claudio Miranda won the Best Cinematography Oscar for his work on “Life of Pi.” The other nominees included Seamus McGarvey for “Anna Karenina”, Robert Richardson for “Django Unchained”, Janusz Kaminski for “Lincoln”, and Roger Deakins for “Skyfall.” 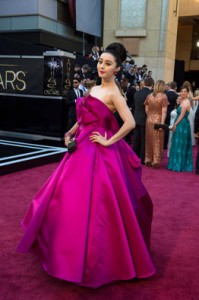 Chinese actress and fashion diva Fan Bingbing arrives at the Dolby Theatre in Hollywood, Calif. on Sunday to attend the 85th Academy Awards. In 2011, Fan Bingbing recently starred in the film “Buddha Mountain”, the Korean film “My Way” together, and in 2013 she is due to appear in Iron Man 3. In 2011 she starred in “Shaolin”, “The Founding of a Party”, and “Stretch” with Nicolas Cazalé and David Carradine.
(Photo by Matt Petit/©A.M.P.A.S.)

Bill Westenhofer, Guillaume Rocheron, Erik-Jan De Boer and Donald R. Elliott of “Life of Pi” won for Best Visual Effects. They came out on top of a field that include “The Hobbit: An Unexpected Journey”, “Marvel’s The Avengers”, “Prometheus”, and “Snow White and the Huntsman”.

Minkyu Lee was nominated for Best Short Film (Animated) for her film “Adam and Dog”. The award went to John Kahrs for “Paperman”.

Eiko Ishioka was nominated for the Best Costume Design Oscar for her work in “Mirror Mirror.” The award went to Jacqueline Durran for “Anna Karenina.”