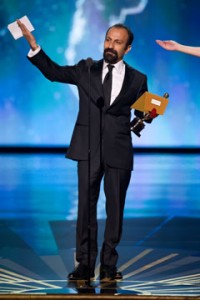 Asghar Farhadi accepts the Oscar® for the Best Foreign Language Film of the Year from Iran, “A Separation”. (Photos courtesy of Academy Awards)Sharmeen Obaid-Chinoy and Daniel Junge with their Oscar® for Best Documentary Short Subject for “Saving Face”.

The Academy of Motion Picture Arts and Sciences presented the award for best Documentary (Feature) to Daniel Junge and Sharmeen Obaid-Chinoy for “Saving Face” the story of renowned plastic surgeon Dr. Mohammad Jawad, who left the comfort of his profitable London practice to return to Pakistan and help the victims of acid attacks, mostly women, and their battle for justice and their journey of healing.

The best best Foreign Language Film went to director Asghar Farhadi for “A Separation.” Set in contemporary Iran, the compelling drama is about the dissolution of a marriage and the effect it has on the extended family that reveals a culture in conflict.

In his speech, Farasi said, “At this time many Iranians all over the world are watching us and I imagine them to be very happy. They are happy not just because of an important award or a film or a filmmaker, but because at the time when talk of war, intimidation, and aggression is exchanged between politicians the name of their country, Iran, is spoken here through her glorious culture, a rich and ancient culture that has been hidden under the heavy dust of politics. I proudly offer this award to the people of my country, the people who respect all cultures and civilizations and despise hostility and resentment. 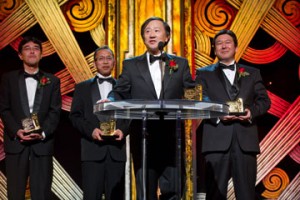