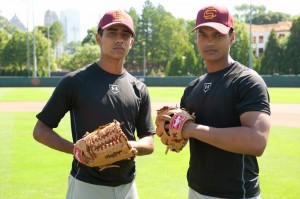 In 2008, Rinku Singh won the first Million Dollar Arm competition out of 37,000 contestants in India. He threw a fastball accurately at a speed close to 90 mph. Together with runner-up Dinesh Patel, the two young men from a rural village got a chance to go to America with sports agent J. B. Bernstein to try out for Major League Baseball.

For six months, they trained with USC pitching coach Tom House. Just ten months after they had first picked up a baseball in India they were signed by the Pittsburgh Pirates’ minor league, becoming the first Indian players to play professional baseball in America.

Director Craig Gillespie, known for his charming indie film “Lars and the Real Girl” (1997), made a mainstream turn with this Disney feel-good production. Screenwriter Thomas McCarthy (Oscar nominated for Best Original Screenplay for “Up”, 2009) has kept the amazing, true story as the backbone. The fleshed out details are added or altered for dramatic appeal.

When sports agent J. B. Bernstein (Jon Hamm) is at the end of his rope, cash flow dwindling and no prospects in sight, he stares at his TV, flipping channels. Between a cricket game and Susan Boyle singing “I Dreamed A Dream” on Britain’s Got Talent, an idea flashes across his mind: a reality TV contest to scout for the next Major League pitcher in the cricket-dominated land of India.

Well, in reality, it was 2008 when the first Million Dollar Arm competition kicked off in India, a brainchild of venture capitalists Ash Vasudevan and Will Chang. Susan Boyle’s winning performance was first aired later in April 2009. However, with those fantastic, real life success stories, both baseball and Boyle, one would overlook, or not have noticed, the mash-up of facts and fiction. We all love to see dreams come true. 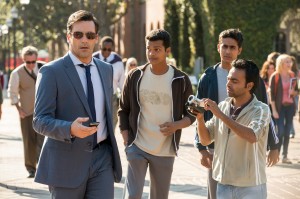 When it comes to the fusion of fantasy and reality, Suraj Sharma should know. He plays Rinku Singh and is a good choice, for he too has experienced a similar game-change in his life not too long ago when he was picked by director Ang Lee in India among 3,000 youngsters to star in Life of Pi (2012). The film had gone on to win four Oscars.

The same with Madhur Mittal, who plays Dinesh Patel. Mittal met his real life turning point when being cast in Slumdog Millionaire (2008), the movie itself was a fantasy realized, nabbing eight Oscars including Best Picture.

Both Sharma and Mittal are aptly authentic in their portrayal of the two baseball hopefuls Rinku and Dinesh. But instead of giving them more story and deeper character development, we mainly see the two young stars pitching and a few clichéd episodes of culture shock. However, I must note that the scenes when they have to leave their home, family and village, when Rinku hugs his mother and Patel his father, those are treasured moments I am glad the director has spent time on. Not every move to America is necessarily greeted by cheers.

That said, the movie mainly focuses on sports agent J. B. Bernstein instead of the two young men coming from India, for J. B. too has some growing up to do. This is TV “Mad Men” Jon Hamm’s first major leading role in a feature movie. Career driven and business minded, J. B. fails to relate well with the boys in their new environment, and it feels that effect spills into Hamm’s performance in being less than engaging. 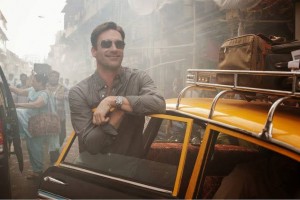 J. B.’s tenant and medical intern Brenda played by Lake Bell is the much needed emotive gel bridging the gap between America and the newcomers. Bell herself is a talent who had written her directorial debut last year, the fine indie film “In A World”.  She deserves more screen time. “Million Dollar Arm” can surely be enriched with more of her involvement. Without much story development, Brenda’s falling for the aloof J. B. is a bit unconvincing.

In real life, Bernstein has had some celebrity clients including Barry Bonds, Barry Sanders, and Wayne Gretzky. He did meet his would-be wife Brenda during the time when he recruited Rinku and Dinesh through the first Million Dollar Arm contest, albeit not as a tenant. I bet he must have put in more affective investments than Hamm’s portrayal in the movie.

Thanks to other supporting cast, the movie maintains its appeal. They include Pitobash as Amit, the sidekick translator who in real life had gone back to India and become a baseball coach, and Alan Arkin as the dozing scout Ray who can hear the whizzing of a flyby ball and know its speed with his eyes closed. Aasif Mandvi as business partner Aash and Bill Paxton as USC coach Tom House help the fantasy grounded in reality. To J. B., a bachelor, Aash is a good reminder that life is more than business contracts when you have to handle the aftermath of twins throwing up in their beds in the middle of the night, and that just may be one of the easier nights.

The 124-minute movie needs some tighter editing to pick up the pace in several sections, particularly at the beginning. Nevertheless, the music is a wonderful diversion. Lively and contextual, the score that is full of Indian flare is composed by another fantasy made real legend, A. R. Rahman. While he has numerous Bollywood features under his belt, it is his score and song for ‘Slumdog Millionaire” that won him notable awards including two Oscars, catapulting him into international fame.

Disney has pitched an uplifting story. Despite its flaws, the movie is still worth a watch. The victory of the two young men in that first Million Dollar Arm reality contest is an amazing fact that deserves to be celebrated.