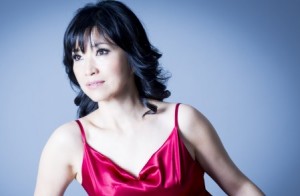 According to The Dakota website, Keiko Matsui is `beyond category’ as a courageous, spiritually-driven and consummate artist who enjoyed the distinction of being an invited guest and performer at the second International Jazz Day, sponsored by UNESCO and held in Istanbul in April 2013. Her unique melting pot of musical influences have garnered her a devout international following.

The eloquent and soft-spoken but yet deliberate musician tours relentlessly and seeks to make a genuine connection with her audience. “Everybody has so many things going on in their lives but my concerts are special for me. The music creates a oneness. The exchange I share with my audience is the root of my energy. It’s like my mission.”

Matsui has worked alongside the best including Miles Davis, Stevie Wonder, Hugh Masekela and Bob James. A true humanitarian, Keiko has lent her voice to raise awareness for such causes as The Daniel Pearl Foundation, The United Nations World Food Programme, Be The Match Marrow Registry and The National Donor Program and Marrow Foundation. She has also lent her efforts to the continued revitalization and healing of Japan in the wake of the recent Tsunami and Fukushima disasters.

“I still have these images of kindergarten teachers holding their kids in order to protect them. I also think about all of the older people who did not make it and the children who lost parents,” said Keiko, the first Japanese musician to top the Billboard Contemporary Jazz Charts. “But when I think about the people who did survive, I think that they may be the strongest souls there are. Out of this pain, I have found the greatest strength from these individuals.”

Matsui’s new recording Soul Quest, is a riveting new collection of songs that unfold like an epic journey. With an all-star cast that includes such heavyweights as producer and drummer Narada Michael Walden, guitarist Chuck Loeb, saxophonist Kirk Whalum and bassist Marcus Miller, among others, Keiko explores themes of love, loss, spirituality and environmental consciousness. www.keikomatsui.com