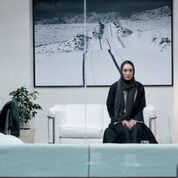 Hedieh Tehrani as Minoo in a scene from the Iranian film “Duet.” (DreamLab Films)

Hamed (Morteza Farshbaf) has a chance meeting with his college old flame Sepideh (Negar Javaherian) in a music store. We find out later that the episode has been set up by their mutual friend Kaveh (Kaveh Kateb) who works there. Interestingly, while they catch up on life, albeit awkwardly, both their spouses are waiting in their car outside. Hamed’s wife Minoo (Hedieh Tehrani) has always urged him to make a clean break; Sepideh’s husband Massoud (Ali Mosaffa) is oblivious to his wife’s old love relationship until he observes her changed demeanor when she came out of the store, clearly affected by something that happened inside.

Thus sets the stage for two pairs of duet to interplay. Massoud goes to great lengths to investigate his wife’s previous affair with Hamed while they were college students. He discovers that the two had actually played and recorded a duet for piano and cello, composed by Hamed. Hedieh Tehrani, who plays Sepideh’s husband Massoud, was the main character in the Farhadi directed film “The Past” (2013), which tells a story in a similar vein. Jealousy and fear of loss are often powerful motivators for action. The present is very much bound by the past.

This is Danesh’s directorial debut with a full-length feature. He had participated in the filmmaking workshops conducted by the venerable Iranian auteurs, the late Abbas Kiarostami and this year’s Best Foreign Language Film Oscar winner Asghar Farhadi. “Duet” exudes a definite resonance in the style of Danesh’s mentors.

There are several distinct stylistic elements in “Duets” that should be noted. Danesh is detailed in his storytelling, every frame is meticulously designed and placed. He takes his time to let the camera stay on his characters, drawing out the nuances of internal thoughts. Set design is rich and informative. Viewers are alerted to sounds as well as silences. 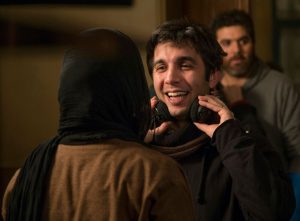 With the sound comes the score. The music is intense and leading, creating an ominous mood in many scenes, framing the story in a serious tone. The two couples, four players, are drawn into deeper and deeper entanglement as misinformation and suspicions grow. We can see traces of Farhadi’s signature style in Danesh’s depiction of marital conflicts delivered by the excellent cast with nuanced performance.

We also see the Kiarostami influence, and that is the elliptical element, his “Certified Copy” (2010) comes to mind. Here in “Duet”, the dialogues between Hamed and Sepideh at their encounter suggest something tragic had happened in their past relationship which is unknown to the viewers, something that sounds like more than just a simple breakup. By not leading into that part, the story lacks the power to fully engage emotionally, while the suspenseful expectation elicited from the audience is not fully rewarded. At 103 minutes, the film could benefit from building up more in the backstory and side story before coming to that abrupt ending. Nonetheless, such flaws do not hinder my enjoyment of the work.

Overall, “Duet” is an elegant film meticulously done, a fine debut of a promising director. Screenings at the 60th SFIFF on April 13, 15, and 16 in the Bay Area. For more info and tickets go to the SFIFF webpage http://www.sffilm.org/festival/lineup/duet#.WN3AnRgZNE4.