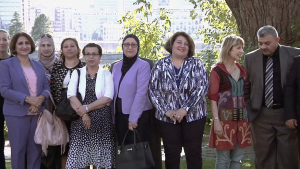 A scene from “Our Iraq,” a documentary written and directed by Twin Cities-based Iraqi refugees.

The new half-hour documentary in the Iraqi Voices series dismantles caricatures of Iraqis and Muslims in the United States – Muslims pray at a Catholic church in Minneapolis, refugees own a St. Paul neighborhood grocery, and a public school administrator becomes the first Muslim woman to win an election in Minnesota. The films are photographed and edited by Nathan Fisher and produced by the Iraqi and American Reconciliation Project.
Iraqi Voices is an ongoing collaborative video initiative that empowers Iraqis in Minnesota to transform their stories into short documentaries. Since 2012, Iraqi Voices has produced thirteen short documentaries directed by Iraqi refugees and Iraqi Americans. The six films produced in 2014 collectively won the Audience Award at the 9th Mizna Arab Film Festival. Iraqi Voices is made possible by the voters of Minnesota through a grant from the Minnesota State Arts Board, thanks to a legislative appropriation from the Arts and Cultural Heritage Fund.
Based in Minneapolis, the Iraqi and American Reconciliation Project (IARP) facilitates artistic and cultural dialogue between Iraqis and Americans. IARP presents Iraqi and American voices to counter negative stereotypes, build mutual understanding and respect, and provide a platform for dialogue.
For more information visit www.iraqiartproject.org and www.reconciliationproject.org.
Share