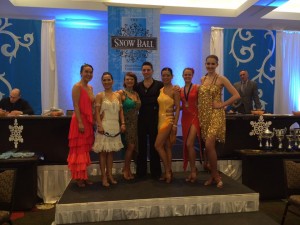 EDINA — Ballroom dancing is among the most popular recreational and competition events around the world, and its a good way to have fun and stay fit indoors during the cold winter months in Minnesota.

This past weekend the members of the annual Snow Ball event was held at the Hilton Minneapolis/St. Paul Airport, Mall of America Hotel. The event drew hundreds of dancers from around the region  to compete in 21 events

“We’ve grown to become the most friendly, action-packed, two-day competition in North America,” states event organizer Donna Edelstein on their web site. “The Snow Ball is the perfect event in which to compete.

The competition boasts a diverse panel of judges, a well maintained competition floor and an audience packed with cheering spectators.

“Many competitors return year after year because they just love the competition, the atmosphere and the way that they are treated,” Edelstein added.