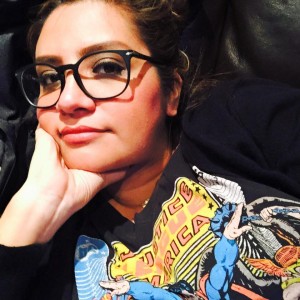 ST. PAUL, Minn. (May 3, 2015) — I had the privilege of interviewing Cristela Alonzo, prior to her “Wits at the Fitzgerald” appearance Friday with the Minnesota Public Radio program in Saint Paul.

As a famous television star on ABC’s Friday night lineup, Alonzo, co-creator, co-executive producer and star of her own sitcom “Cristela”, said she is hyper-aware of being the first Latina show on air in five years and shared with enthusiasm with being part of the only Latino television family currently on a major television network.

“The sit comedy is based on my real life family,” Alonzo said, “I enjoy writing scripts that reflect what it was like for me to be raised in a poor Latino family. It’s important that a variety of television shows represent a wide range of Latino families . . . so that viewers understand that, just like White families are not all alike, Latino families vary as well. Not all Latino families are alike.”

On episode eight of Cristela, Alonzo’s television mom, played by Terry Hoyos, is perplexed about her daughter’s lofty, American dreams. Her relationship with her real life mom, who passed away in 2003, inspired the show and many of the poignant and hilarious story lines. Alonzo smiled in telling that her real life mom aggressively encouraged her to become a hairdresser.

“My mom told me that people’s hair grows regardless of being in a recession and that’s why I would always have a job,” Alonzo said.

On one show, her TV mom worries that Cristela will inevitably abandon the beautiful and rich cultural heritage she grew up with. Her TV mom shouts in exasperation, “The next thing you know you’re going to start listening to NPR!” Both moms, on and off camera, felt protective of Alonzo and feared having her want to pursue passions that were outside that what was expected of her. They believed that the American dream was exclusive to Whites.

“It’s time to start raising awareness about unequal access,” Alonzo said. “There is an obvious and disappointing historical pattern that continues to exclude people of color from diverse racial and ethnic backgrounds among performers and as audience members.”

Alonzo said that national and local media have a long way to go towards inclusion. Increasing full-time hosts of color who are not just assigned topics about race, is an important first step  to showcase the rich beauty within diversity that can bring people together.

“The listener-attendance base grows when everyone is given a voice,” she said.

Alonzo and 2010 Academy Award winner, Golden Globe and Grammy Award recipient Ryan Bingham were invited as guests on the Wits Show, hosted by John Moe. The Fitzgerald Theater and MPR chose two highly talented performers who told tenacious stories, made us laugh aloud and ignited a whirlwind of friendly tweets from dedicated fans.

Alonzo’s boisterous humor was full of awe-inspiring stories and lessons. Her laughter was contagious. She shared her challenges and stories of her life that began in poverty. She loved to sing and studied hard but dropped out of college to take care of her mom.

Alonzo is among the “Top Ten Female Comedian in 2014,” and went on to talk about how she embraced her life experience to co-create a hit sitcom. In the off-season Alonzo is a guest co-host on The View, produced by Barbara Walters.

I asked Cristela what her mom would say if she were alive today to observe her daughter’s newly found success?

“Honestly, my mom wouldn’t understand it,” Alonzo said. “Never in her life did she think that one of her kids would experience success.”

“My mom was afraid to ascend to a better life,” she added. “She couldn’t imagine that our voices could ever be heard.”

At the end of the delightful and inspiring interview, she said, “I always felt like my life stopped me from doing things I enjoyed doing. I’ve always said that life gets in the way . . . yet, part of my childhood dream was to have a voice . . . now, I’m living my dream, which will hopefully inspire others who relate to the story lines in our show . . . I’ve learned to use humor as a way to overcome obstacles and I’m happier than I’ve ever been.”