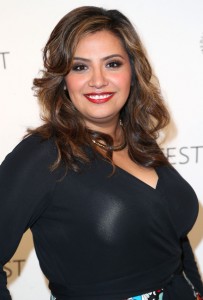 ST. PAUL, Minn. (April 30, 2015) — In a recent phone interview with Cristela Alonzo, she conversed openly about fulfilling her dream to co-produce, co-create and star in ABC’s new situational comedy, “Cristela.”

Passionate about her work, Cristela’s enthusiasm was contagious. She addressed many topics from the United States Supreme Court Justice Sonia Sotomayor, to the importance of being loyal to family and using humor as a gateway towards bringing people together. Humbly, she shared stories about her personal life and what it was like to live below the poverty line. At the same time, the stand up comedian expressed excitement about the “Cristela” sitcom receiving heart felt, positive attention from loyal fans and ABC’s Network. Cristela exclaimed, “It’s very exciting and surreal!”

In the situational comedy, Cristela reveals stories about her life through 22 hilarious and poignant episodes in Season One. Each episode captured nuanced stories about growing up in a Latina/Hispanic family of love, as well as what it was life to make difficult decisions on a daily basis. Her character reveals a journey of navigating complex personal decisions about cultural chasms, racism in the work place and coping with extreme financial stress while continuing to hold out hope for big professional dreams.

Like most people, Cristela spent most of her young life struggling to balance emotional decisions about loyalty to family, along with a deep yearning to pursue a higher education. Cristela’s dreams to co-write, co-create and co-produce a television situational comedy series is a lived reality. Last year, ABC ran 22 episodes of “Cristela,” which launched her into television fame.

Currently in the off-season, she sits with the best and the brightest on Barbara Walters, “The View.” Cristela’s life goal of securing a major television network to pilot a fresh situation comedy has required incredible resilience and patience. But in an effort to raise awareness about the strengths of the human condition through humor, “Cristela” tells stories that weave in tragedy, hardship and resilience into a comedy that everyone can relate to.

In her blog, Cristela wrote “I always felt like my life has stopped me from doing things I’ve enjoyed doing. I’ve always said that life gets in the way.” I asked Cristela if she would be willing to share something to inspire those of us who struggle with creatively navigating the ins and outs of stressful personal lives.

Down to earth, Cristela responded, “I’m working now. Part of my childhood dream is coming true. I’m living into my dream and it’s surreal. I’m enjoying life more than ever! For the first time, I feel like I’m going to be okay. I grew up below the poverty line with a mom that didn’t think acting was a good idea. When you live in abject poverty, there is nowhere to go but up. I made a decision to put everything I had into achieving this goal and it’s working. I want to enjoy this time of my life. But more than this, I want to use my role to emphasize the importance of getting an education and addressing issues about class that are important to everyone. I hope that telling my story of what it was like for me to grow up in my family through intentional characters and episodes will raise awareness about issues that sometimes make life hard.”

If you want to hear more about Cristela Alonzo’s life, work and newfound success, tickets are on sale at the Fitzgerald Theater. The comedy favorite will appear as a special guest on the stage of St. Paul’s Fitzgerald Theater on May 1, 2015. Alonzo and Ryan Bingham are invited to appear live for Minnesota Public Radio’s (MPR) series, Wits. John Moe will host another Hollywood favorite.

In the phone interview on Thursday afternoon, Cristela was full of energy, despite having just walked off of the set from recording an episode of “The View.” With a fully packed schedule, the former stand up comedian and now television star said she’s eager to visit the Twin Cities and meet fans of the show.

Towards the end of the interview, I asked Cristela, “What keeps you going through the hard times?” Cristela responded, “Fearlessness — I saw my mom living through fear — it stopped her from living life. What was the worst that would happen? I had nothing to lose and everything to gain.”