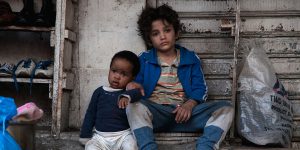 Zain Al Rafeea already had his taste of the limelight at Cannes earlier this year as “Capernaum” won the Jury Prize. This is Labaki’s second Cannes win. Her previous work, “Where Do We Go Now?” was acclaimed with two Cannes prizes in 2011. As for TIFF audience, “Where Do We Go Now?” captured viewers’ hearts at TIFF 2011 when it won the People’s Choice Award.

Labaki’s newest work “Capernaum” begins with a gripping court trial where a boy sues his parents for giving birth to him. Labaki then takes us back to show how this comes about. The film switches back and forth in terms of the time sequences, but overall it is congruent. While such a legal case has to be an imaginary scenario, Labaki’s realistic camera following Zain, whose family is undocumented migrants, takes viewers into the heart of a very real, universal issue, no, not about refugees, but the problem of unfit parenting.

Zain is a precocious boy, approximately 12 years-old, as his migrant parents who have no papers don’t know exactly his birth date. The large family cramps into a small apartment in the slums of Beirut. Parents Souad (Kawthar Al Haddad) and Selim (Fadi Kamel Youssef) resort to whatever means that’s convenient for them to get by, like smuggling drugs into prison where their oldest son is incarcerated, so he can sell to fellow inmates, or giving away their eleven-year-old daughter Sahar (Cedra Izam) to their landlord as a bride in exchange for some material goods and a few chickens.

Zain’s plan to rescue his beloved sister Sahar from his parents’ scheme goes awry. The girl is taken away by force with Zain fighting his parents to save her. In his outrage, he runs away from home. Labaki’s cinema-verite style follows Zain on the streets of Beirut, surviving on mischiefs, and to his credits, his own resourcefulness.

While hanging around an amusement park, Zain meets Rahil (Yordanos Shiferaw), an Ethiopian cleaning woman, also an illegal migrant who has a toddler at home. After seeing Zain wandering about by himself, Rahil brings the boy home, washes and feeds him together with her own young son. Soon, Rahil leaves Zain to take care of the toddler when she goes to work. This works out fine until one day she is arrested.

With Rahil gone, Zain is left with a baby half his size to care for all by himself. Labaki’s handling of the subsequent story leans a little on the idealistic side, portraying Zain as a totally selfless and responsible boy, opposite of how he himself is raised by his own parents. Zain genuinely cares for the little one who is like a brother to him now. His ingenuity and resourcefulness add humour and lightheartedness to an otherwise tragic scenario.

Labaki’s cinematic rendering is compelling. Zain takes the baby along to search for his mother, but to no avail. What’s amusing of course is how he comes up with an explanation why he is all alone on the streets with an African sibling.

What realistically is a tragic situation is captured with heart and compassion under Labaki’s helm. She elicits authentic expressions and in-situ sequences from her non-actors, they more or less play themselves. Zain is a perfect cast with his sad eyes and charisma. What may not seem realistic is the plump face of the big and cute baby, who’s supposed to be hunger stricken after days on the streets without his mom feeding him. It’s heartwarming though to watch how Zain cares for him and tries to feed his little brother and himself.

The story continues to unfurl when Zain later learns of some foreign countries where he wants to move to and he needs to get his paper he thought his parents have. His return home is the pivotal point sending events spiralling down as he discovers the outcome of his beloved sister’s arranged marriage. The storytelling becomes more gripping and intense, leading to the beginning scene of Zain suing his parents in court.

The French title of the film is “Capharnaum”, meaning “a confused jumble, a place marked by a disorderly accumulation of objects” according to Merriam-Webster online dictionary. Watching Labaki’s cinematic capture of Zain’s story in the slums and later the prison of Beirut, the word rings true, cinematic veirte of a human capharnaum.

With the English title “Capernaum”, the word has its origin in the Biblical city where Jesus performed many of his miracles. The human chaos depicted here in the film could well need to call for miracles to alleviate. With no mention of the title in the film, its intended reference could well be these two-fold symbolic meanings.

Labaki’s storytelling is both realistic and reflective. After all the hardships that Zain goes through, the film ends on a positive note. As viewers, we are much gratified for Labaki’s idealistic vision as she wraps. The last shot of Zain is gold.