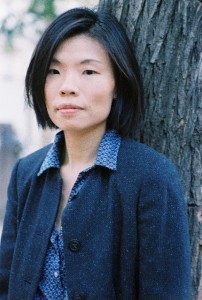 Sze-Lorrain, according to her publishers description, offers a “nuanced yet dynamic vision of humanity marked by perils, surprises, and the transcendence of a ‘ruined elegance.’”

The new book is described as her intercultural journey that traces lives, encounters, exiles, and memories from France, America, and Asia. It explores the historical and literary allusions to European masters, Asian sources, and American influences.

With candor and humor, each lyrical foray is sensitive to silence and experience: “I want to honor / the invisible. I’ll use the fog to see white peaches.” There are haunting narratives from a World War II concentration camp, the Stalinist Terror, and a persecuted Tibet during the Cultural Revolution. There are also poems that take as their point of departure writings, paintings, sketches, photographs, and music by Gu Cheng, Giorgio Caproni, Bonnard, Hiroshige, Gao Xingjian, Kertész, and Debussy, among others.

Sze-Lorrain received her university education as a scholar at Columbia University, New York University and Paris IV-Sorbonne, where she obtained a PhD in French. She lives in Paris, where she also writes and translates in French, English and Chinese.

From the publisher’s interview with Fiona Sze-Lorrain:

Q. Can you speak a little about your writing process or how the poems of The Ruined Elegance came about?
A. Almost every poem in this collection behaved like a beast. I lost whenever I tried to fight it, until I realized how far I missed the mark. “To question the options of elegy, I’ve probably chosen the wrong epic.” [from the poem “Back from the Aegean Sea”] Several verses and their poetic narratives were deviating at the start, in part because I had tried to be clever about a “lyric/anti-lyric.” I wanted silence and music. What better paradox could there be?
It did feel like a crisis when I could only pick these poems up from their “ruins.” I censored words and images even before saying them out loud or putting them down on the page. Part of my illusion had to do with my folly of “writing to tame vulnerability and speechlessness” on the page. While finding ways to cope, I felt drawn to reading poems that were gentle yet could sustain a certain emotional rawness and moral jolt. To recenter myself, I walked — from one arrondissement to another.