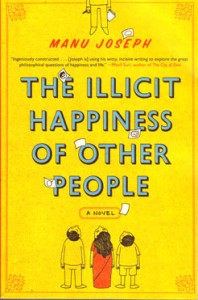 The Illicit Happiness of Other People

A Novel by Manu Joseph

In a similar spirit, yet derived from a time and place closer to home, Joseph crafts the smart, wry story of the Chackos, living in a Madras housing community, where everyone is a gossip, in the late 1980s. A Christian family and meat-eaters like Joseph’s-the Chackos are seen as oddities by their neighbors. As Joseph slyly told the Indian newspaper The Hindu, “It’s all real, I haven’t made up anything.”

The story starts three years after seventeen-year-old, gifted cartoonist Unni Chacko mysteriously fell from the balcony of his building. His family-father Ousep, a once-promising writer, is a journalist who drinks too much at night and has his family stage his suicide while reciting his obituary.

His mother Mariamma had been an intellect but instead came to raise their two boys, gleefully fantasizes about her husband’s death. She compulsively strikes extraordinary poses while meaning to be cooking; and twelve-year-old, little brother Thoma, who wears his dead brother’s hand-me-downs and fawns over their beautiful neighbor, one of Unni’s close friends-have coped by not coping.

When the post office delivers a comic drawn by Unni that had been lost in the mail since his death, Ousep, shocked out of his stupor, ventures on a solitary quest to understand his son and rewrite his family’s story.

Through brilliantly controlled prose and unsettling encounters, Joseph exposes the essence of domestic life in southern India. From male-female dynamics to the value of reputation, to the overwhelming pressure on teen boys that compete in a single test for the right engineering college or be doomed to a second-class life.

The cast is quirky, yet unerringly written characters, along with Joseph’s remarkable voice. His humorous observations transforms The Illicit Happiness of Other People from mere social commentary to an unforgettable narrative that fearlessly takes on some of life’s most haunting questions.

We first meet the Chackos on an ordinary morning: Mariamma serves Ousep coffee while he studies a pile of Unni’s cartoons. Ousep ponders them like a sacred text, especially the one waylaid for three years and likely Unni’s last drawing. He has kept it a secret from Marianima, who has not told him of how she figured in one of Unni’s last revelations.

Meanwhile, Ousep tracks down Unni’s friends to question-or rather torment -them, from his classmates to a former teacher who has left the school to the Society of Amateur Cartoonists to a neuropsychiatrist whom Unni consulted in a desperate, attempt to grasp his son’s sudden final act.

Ousep discovers more about Unni and the people his son knew: an alleged ability to read minds, his nighttime adventures, and something about a corpse. Through Ousep’s investigation, Joseph threads a multilayered psychological mystery, filled with questions on spirituality, the meaning of normal, and the hidden lives of those we think we know best.

Deftly combining fan-tily drama with philosophy, social satire with satisfying storytelling, The Illicit Happiness of Other People reminds us that the greatest mystery of all-the one most worth our time and energy-is understanding the people we love.

Joseph lives in New Delhi, where he is a columnist for the International Herald Tribune and editor of Open magazine.