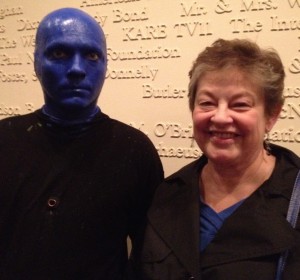 One of the Blue Man trio, left, with Ms. Carole Adams at the Ordway Center for the Performing Arts on April 29, 2014.

The incredible performance was another reason why one might explore the option of season tickets. Many performances featured at the Ordway last winter helped to increase the lack of Serotonin towards fighting the winter blues.

The timing of their performance was perfect! Audience members like, Ms. Lian Simmer stated, “I don’t think I quit smiling.” Simmer was invited on stage to participate in a twenty-minute act that had audience members laughing hysterically.

Simmer, from Saint Paul, was hilarious on stage and a great sport!  Her friend Ms. Calla Paule, from Saint Paul stated, “The performance was amazing! I’ve never seen anything like it!” and, “I think my face is going to be sore tomorrow from smiling so much?”

In addition, some select audience members were invited to participate on stage, dance and play lightweight volleyball with magnanimous, colorfully lit, cloth balloons.

Another ticket holder, Ms. Carole Adams from Blaine shared, “The show was colorful, and magnificent. It’s a show my grandchildren would enjoy.”

After long stretches of depressing weather this winter, the blues fell away during the performance. 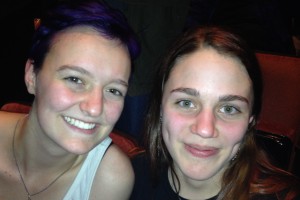 Lian Simmer, left, and Calla Paule, at the Blue Man Group show at the Ordway Center for the Performing Arts on April 29, 2014. (Photos by Dr. Hoo Sook Hwang)

Inside the Ordway, The Blue Man Group’s artistic, musical and technologically awe inspired performances captivated the audience with magical stunts, luminescent color and uplifting humor. The variety of performances, were creatively woven into respective visual fields on stage, similar to our optic pathways used by our brains.

Movements of color, brightness contrast and depth wildly engaged the plasticity in our brains to rapidly adapt to the amazing visual stimuli going on around us.

Founded in 1987, the Blue Men has evolved as a trio of actor-musicians that has become an internationally renown oerformance group. Hopefully, The Blue Man Group will return to Ordway’s Stage again to engage us in a techno-colorful performance that was truly awe inspiring.