Philippines’ feature film “Birdshot”, written and directed by Mikhail Red, is one of six entries at the New York Asian Film Festival in competition for first-and second-time directors whose films are receiving their North American premiere at the festival.

Red’s debut work “Rekorder” won the Best New Director award at the 2014 Vancouver International Film Festival, he was only 23. Now three years later, Red brings his second feature to North America. At the NYAFF, he will attend the Q & A with the screening of “Birdshot” on Thursday, July 6.

“Birdshot” is an intense and suspenseful thriller. A farm girl, Maya (Mary Joy Apostol), accidentally trespasses into a bird sanctuary and shoots dead a protected Philippine Eagle, an endangered species. She carries it back to her home. Her distressed father, Diego (Ku Aquino), cooks the bird that night, buries the shot gun the next day and tells her not to say anything about it.

The consequence of Maya’s oblivious act will ultimately lead to a devastating end and a discovery dark as night. Apostol as Maya is a natural. Her performance is mature and understated. Lots of potentials in this young actor. Credits must also go to director Red in drawing out Apostol’s natural talent.

At the same time, the story follows a young policeman Domingo (Arnold Reyes), a loving husband and new father. At first totally absorbed in solving the mystery of a missing bus carrying ten passengers on route to Manilla, just as he has found some suspicious evidence pointing to foul play, the case is taken away from him and his senior partner Mendoza (John Arcilla). Instead, the two of them are given the order to pursue the lost eagle from the sanctuary and track down the suspected poacher.

Writer director Red is masterful in leading us along two tracks of suspenseful storylines. Maya’s   oblivious wrongdoing in the bird sanctuary is the turning point of her life. In parallel, Domingo’s initial innocence as a fresh, new cop will soon disintegrate as he is pressured and threatened to bow to corrupt authorities. The two lines meet when Domingo and his senior partner pursue Maya’s father Diego as the suspect of the lost eagle, igniting irreversible devastation.

Underneath the violent surface is Red’s nuanced characterization. When we first see Domingo, he is watering his home garden. As he notices a piece of trash paper fall on the ground after his neighbor has taken out the garbage, he goes over to pick it up and puts it in the trash bag. A young and caring policeman, a man of principles and commitment is soon, too soon, tainted and bent to fit the system. 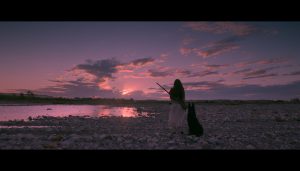 Red uses the camera effectively in depicting the seemingly peaceful, rural landscape enfolding the evils of men. The cinematography brings out a meditative mood, yet at the same time, pulling us in with edge-of-your-seat kind of eerie suspense. The scene of Maya shooting the eagle, the closing in, reverse shots of the girl and the bird, the innocent shooter and the prey are simply mesmerizing and rich in symbolism.

This is one of those films that depicts crimes and violence but elicits soulful pondering from within; “No Country for Old Men”, “True Detective”, and “Fargo” come to mind. The parallel symbolism is apparent. There is a nature sanctuary, yet an endangered bird is killed right there by an innocent and innocuous girl. What about the not-so-innocuous men in the world? Is there a safe place to be sheltered from them? Into a deeper layer, is there a sanctuary to protect the human heart?

“Birdshot” will screen at the NYAFF on Thursday, July 6. Director Mikhail Red attending for Q & A. For details go to NYAFF webpage.