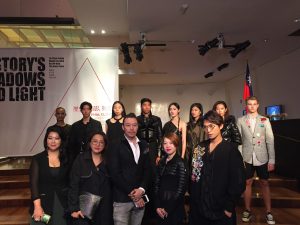 This year’s fashion show will feature six Asian fashion designers and brands including Alexander King Chen, Edison Lu, Liling Wang, Danny Nguyen, Jennifer Chen and Wendy Chen. This year’s show partners with Taipei Cultural Center in New York to bring two of the most talented designers from Taiwan to the fashion capital New York City to showcase what the Taiwan high fashion is about, and also once again partnering with China Institute, the oldest bicultural and non-profit organization in America to China.

Based in Taiwan and born in the USA, Alexander King Chen (陳科維) is currently one of the most volcanic young fashion designers in the Chinese speaking world. His impressive roster of noteworthy Asian celebrity clients include Fan Bing Bing, Sandrine Pinna, Barbie Hsu, Terri Kwan, Jolin Tsai, Mavis Fan. Alexander King Chen proves himself to be a staple to the stars as they frequent film festivals the world over: Cannes I.F.F., Hong Kong F.F., Shanghai F.F., Asia Pacific F.F., Busan F.F., Singapore F.F. and the likes. Starting his strenuous career at the young age of 16, he studied at Central St. Martins and the London College of Fashion in Great Britain. His resume includes having worked in London, Paris, New York, and Taiwan. Launched in 2009, Alexander King Chen has molded a successful luxury brand that not only bears his name, but makes time to design costumes for series, concerts, and even his own reality show.

At the age of 17, Edison Lu (呂白) began his pursuit of design and began training as an apprentice hair stylist. He began his initial studies at The Vidal Sassoon Academy In 2003. In 2004 he began training as a basic Wella Color specialist. By 2007 he had finished his requirements and was appointed Master Wella specialist. This is where he began his entrepreneurship and established his very first salon: & Hair Lounge in NYC Manhattan. Since then he has expanded to multiple locations as well as landing editorials in featured publications. Edison Lu and the Taiwanese famous actor Mike He debuted their menswear fashion brand “To Be THRILL” during New York Fashion Men’s Week in July 2017 and has received a lot of media attention.

Liling Wang (汪俐伶) is founder of DARKLIGHTDESIGN Studio and creative director of WANGLILING. At the age of 19, her interest in using technological materials had reflected in her projects throughout the early study of fashion design in Shih Chien University. She was later enrolled at Central Saint Martins College of Art and Design to study MA Textile Futures. During the time at London, her thoughts on combining various fields such as science and fine art have grown even wider. Wang Li Ling was established to embark a modern era of eastern culture. Known for the amusing construction of functional fabric, that blur the lines between east classic & modern chic. The main image set by the designer, anti-conformist and even rebellious at times. In which showcase a glowing fashion wave of luxury, technology and oriental flavor. 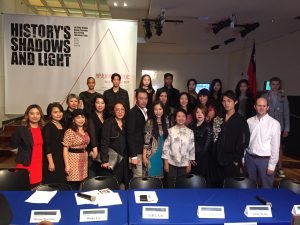 Despite his now bolstering yet enigmatic personality, Danny Nguyen’s foundation in the fashion world is rooted in the soil of humility. He began as a child, under the wing of his mother. Predating his arrival to the United States, Danny would be seen at a very early age cutting fabrics, collecting designs and assisting with custodial chores around his mother’s alteration. From hence, Danny has developed further in many other aspects of the fashion world upon his arrival to the rich and diverse culture of Houston. He has his own studio for alterations and design entitled DNC (Danny Nguyen Couture) in which he spends a great deal of time pursuing his dream which dances at the end of every needle he drives into his next exquisite creation.

Wendy Chen (陳佳欣) is a jewelry designer based in NYC. She established the foundation of her design career as an interior designer at a prominent NYC architectural firm. She began designing jewelry and accessories for a NYC based Accessory/Jeweler in 2008 who sold her collections worldwide from NYC, to UAE, Europe, Asia, and Australia. Since debuting her first Design Collection, Wendy has been creating Jewelry/Accessory that are as beautifully envisioned as they are creatively constructed. All her designs are handcrafted in NYC with natural elements, sterling silver, combined with Swarovski Elements in Crystals and Pearls.

In addition to having six fashion designers to display their featured designs on the runway, AsianInNY has recruited the international fashion industry’s experts to contribute to the runway show. Hairstyles will be done by Hair Philosophy; makeup by Cakra Fashion Makeup & Skincare.

The 2017 fashion show’s featured performers will include:

Melody Yeung (楊韻禾): Singing and performing since the age of 4, Melody was a singer-songwriter in Taiwan for many years before returning stateside to finish her college degree from Columbia University. Melody has released two solo albums, “You Don’t Know” and “M-Girl” as well as numerous collaboration releases with artists such as Nicky Lee, Machi, F.I.R., Stanley Huang, and Sam Lee.

AsianInNY 2017’s fashion show will be emceed by Jocelyn Chia. Jocelyn is a New York based stand-up comedian and actress originally from Singapore. A lawyer turned comedian, she was featured on cnbc.com for winning the Gotham Comedy Club’s Funniest Lawyer Competition. She has been a guest comedian on Sirius XM, a guest host on MTV, and is the winner of the 2016 Ladies of Laughter Competition. In 2017, she made her standup television debut for AXS TV’s Gotham Comedy Live, hosted by William Shatner.