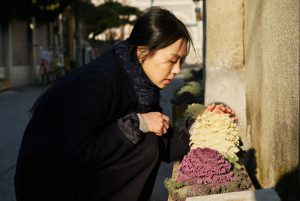 “On the beach at night alone,” the second selection of South Korean director Hong Sang-soo’s films to be screened at the 55th New York Film Festival, is a much freer exploration in color with an expansive setting than his first screening at the Festival, the black and white, tightly focused “The Day After.”

“On the beach at night alone” offers a glimpse into the internal world of a young actress named Young-hee who is caught in a scandal of her affair with a famous director. The story parallels the real-life situation director Hong faces with his muse, actress Kim Min-hee. The film could well be Hong’s personal response to the media frenzy over his extra-marital relationship.

The parallels are obvious, the sentiments genuine. Hong is smart to focus his story on a character study of the young actress Young-hee, and have Kim play her, a character who exudes a sensitive and passionate persona. Kim’s performance can readily elicit empathy. Hong leads viewers to explore the internal world of Young-hee and paints a passionate human soul.

In the first part of the film, Kim is an actress sojourning in Germany. She has a friend, Jee-young (Seo Young-hwa), who lives there and has learned to enjoy solitude in a life on her own. She tells Young-hee that living alone is what she prefers when Young-hee asks her if they can live together. Aloneness can be a choice, not necessarily a curse. That might be something Young-hee has not thought of before.

In a foreign land, Young-hee can be in touch with her feelings and find shelter in anonymity. She is thus protected from the fallouts of her relationship with the film director, an older man who’s married and has a child. While away from home, it is also a time for her to come to terms with the end of the affair. Whether their real-life romance would come to termination or continue on, that is not the issue here. With the film, Hong has crafted a telling perspective by exposing the heart of a young actress in a similar situation. Kim delivers with remarkable poise.

Kim’s nuanced and affective performance as Young-hee led her to win the Best Actress Award at the Berlin International Film Festival earlier this year. Hong depicts Young-hee to be spontaneous and expressive, placing her in several mesmerizing scenes where her whole body speaks poignantly.

First, as she follows her friend Jee-young into a park in Hamburg, she stops and kneels down on the ground, bows prayerfully as she is moved by the peaceful surrounding. In another scene, she stands outside a coffee shop smoking a cigarette, swaying her body slowly and singing meditatively, yearning for a distant love. Further on, she stoops to touch a flower, then closes her eyes to smell and caress it, adoring its beauty. Towards the end of the film, she lies on the sand at the beach asleep, dreaming.

As if these moving scenes are not enough, Hong spells it out, almost achingly, as Kim exposes Young-hee’s inner torments. We hear dialogues that sound like testimonials: “I want to live in a way that suits me… in my own way,” she tells Jee-young while in Germany. When Young-hee goes back to her home city of Gangneung, Korea, she looks up her old friends. Over drinks, and a little too much soju rice liquor, she pours her heart out. Like a wounded animal in a trap, the young actress reveals her inner torments and distress. Later when she goes with her friends to a seaside hotel, among many telling lines, we hear the question being asked “two people in love is immoral?” That is probably Hong’s most direct address to his own predicament.

In the director’s signature style, the last segment of the film has a repeat act. But this time, it is not a re-enactment of an event or a hopeful alternative. We see a film crew lead Young-hee to the director Sang-won (Mun Seung-kun). The two former lovers confront. They sit across each other with crew members at the table. The director expresses his regrets. She has an open dialogue with him, giving him a piece of her mind, again maybe over too much soju. The next moment we see Young-hee sleeping on the sandy beach again. Alas, what has just occurred is but a dream. As she wakes, she gets up from the sand and walks away from the quiet beach back to reality, alone.

“On the beach at night alone” will screen at NYFF55 Oct. 8 and 9. Q & As with Hong Sang-soo following the screenings. For more info go to webpage