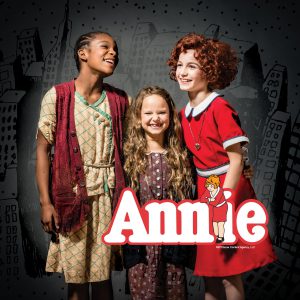 “Annie” playing through December at the Ordway Center for the Performing Arts.

ST. PAUL, Minn. (Dec. 9, 2017) — Thirteen-year old child actress Carly Gendell and cast drew in a Friday night crowd of over 1,600 ticket holders at the opening production of “Annie” at The Ordway Center for Performing arts that through Dec. 31.

The role of Annie cast by Carly Gendell was a perfect match for the girl who loves the adrenaline of performing the former punchy comic strip character originating back to the 1920’s. The tough and scrappy “Annie” as originally written in the comics was about surviving through the Great Depression. Her story has since been transformed into countless artistic transformations from movie productions to Broadway shows.

Despite being poor and orphaned, Annie’s spunky spirit is about positivity and the fun-loving cast created an opening night production that left me believing, “The Sun Will Come Out Tomorrow.”

Gendell captures the resilient traits of Annie’s character that have remained constant throughout time. Gendell’s vocal range reminded me of Kristen Chenoweth. Her enthusiasm, high voltage energy and charisma throughout the two-and-a-half-hour production.

Under the direction of Austene Van, Michelle Ragusa mirrors exceptional vocal and satirical talent as Miss Hannigan. Together, Gendell and Ragusa dual on stage, each lyric more humorous than the one before. Miss Hannigan’s paralyzed pessimism meets her match when orphaned Annie’s optimism undermines her skewed and cynical perspective of the world. Plagued by jealousy, Ms. Hannigan devises a scheme with brother Rooster Hannigan (played by Britton Smith) and hated sister-in-law Lily St. Regis (played by Cat Brindisi). In an abrupt twist, the three characters master mind an addled plan to dismantle Annie’s adoption to a billionaire, Oliver Warbucks (played by Lance Roberts) set up by Grace Farrell (played by Ann Michaels).

Twenty-One scenes including nostalgic favorites from, “It’s a Hard Knock Life” and “Tomorrow” were sung by a truly gifted and even operatic cast. The child performers (Erika Dierke as Molly, Olive Middleton as Molly, Audrey Mojica as Kate, Brianna-Marie Mraz as July, Josie Turn as Duffy, Valerie Wick as Tessie) was an exceptional young cast like I have not seen before and were dynamic and unforgettable. Michelle Ragusa as Miss Hannigan was brilliant and sassy. Her abilities to sing powerfully, act, dance and exude a broad range of emotions all at the same time, while working with sets, props and wardrobe changes was flawless.

Then there is Sandy — Annie’s adorable dog (played by Marti). Gendell’s character, orphaned Annie parallels Sandy’s story as the stray and homeless dog. Different than some productions, this Sandy disappears half-way through the production which left me to wonder if the dog had the, “Happily ever after ending, like Annie?” Even so, the dog’s appearances were delightful and pulled at my heartstrings as a person who has a love for pets.

Lance Roberts (who plays Oliver Warbucks) seemed like an obvious choice. Robert’s strong acting and booming voice penetrated the theater. However, his voice and heart softened throughout the storyline as Annie grew closer to being adopted. He, along with Grace Farrell (played by Ann Michels) created an additional relationship on stage that were both charming and like a fairy tale come true.

I was captivated by this prized production and it’s ‘happily ever after’ story line if for only one night. “Annie” made me forget about the stress that naturally ensues during this time of the year. “Annie” was talent packed and exceptionally fun. The couple in front of me enjoyed “Annie” so much I asked them if they knew someone in the show? They said they didn’t, but they loved it! There are too many highlights to focus on just one. I’d see it again in a heartbeat.